Cheek Implants in Patients with Dentures

Cheek implants are an effective method for adding projection of various areas of the zygomatic midface. Because they are various shapes of cheek implants that are available, there is a fair amount of art as opposed to science in selecting style and size of implant to get the patient’s desired effect. Because these implants are placed on the side or underside of a bony surface, they are also prone to postoperative migration in an inferior direction of they are not secured. 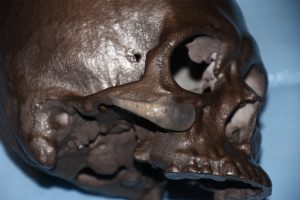 Cheek implants are typically shown in textbooks, journals, and patient results in patients who have teeth. By having teeth, the vertical distance from a positioned implant to the maxillary vestibule (highest area under the upper lip) is maximized. There will always be a good soft tissue buffer between the implant and the inside of the mouth. This lessens the long-term likelihood of implant exposure should it ever migrate downward. (if one secures the implant with screws, this will not happen)

In the patient without teeth, however, the use of cheek implants can be more problematic as the facial anatomy has changed unfavorably. The loss of upper teeth changes the structural integrity of the face. The vertical dimension of one’s occlusion (bite), or the height of the bite formed by the contact of the upper and lower rows of teeth, determines the shape and length of the cheeks. When a patient becomes edentulous, the mouth closes too fully with no teeth to separate the jaws, thus contributing to a sunken in appearance of the cheeks. Without teeth, the cheeks tend to wrinkle, the angle between the nose and the lips changes, the ridges that hold the teeth flatten, and the tongue may splay out to fill the open mouth space. These changed features often make the edentulous patient seek midface volume replacement.

The fundamental concern in placing cheek implants in a patient who wears an upper denture is two-fold. First, the distance between the cheek bone and the maxillary vestibule has shortened considerably. There is less soft tissue coverage between the implant and the oral mucosa. This makes the use of certain types of cheek implants, the submalar implant specifically, more risky. Because it sits on the underside of the zygomatic bone, it is even closer to the lining of the mouth. Secondly, the flange of an upper denture can be an erosive source causing implant exposure. A high-riding denture flange may eventually cause pressure necrosis of the thin soft tissue between it and the implant. At the least, it can be a source of irritation and discomfort.

Cheek implant selection is critical in the edentulous maxilla. The implant should be placed on the zygomatic prominence and its maxillary extension trimmed if necessary to keep it from hanging too low. The implant should absolutely be secured in place by a screw. If the implant needs to be extended for midface volume, it should go as close to the infraorbital nerve (without compression) as possible. The canine fossa area should be avoided, as tempting as it is to help this volume deficient area. Lastly, the patient’s dentist should be consulted to shorten the posterior flange of the maxillary denture before surgery. The broad palatal surface provides enough surface area for retention that the flanges can be shortened without sacrificing denture stability.