Gynecomastia is a much more common condition than many men realize. While it is manifest by developing excess tissue in the breast. it also has varying degrees of nipple and chest skin deformities. Often the amount of chest skin and nipple position determines the quality of a gynecomastia reduction result. In any case, it is an  embarrassing condition for both teenagers and older men alike.

For gynecomastia that consists mainly of fat or breast tissue deposits, liposuction would be the appropriate treatment. Because of the density and increased fibrous tissue of male breast tissue, traditional liposuction is effective but not ideal. It can take a far amount of trauma to maximally loosen up the tissue to be aspirated. At the least, this results in significant bruising and discomfort…as well as the risk of not removing enough breast tissue.

Dense fat is better removed with a method liposuction that relies on other mechanisms to break up the tissue than just mechanical trauma alone.  Such a technology is Smartlipo. Using directed heat and the concept of heating tissue zones to a set temperature, more breast tissue can be removed in a less traumatic fashion. There may also be some heating benefit on the skin resulting in some shrinkage and tightening, although never enough to be a substitute for chest skin tightening through skin removal.

In those men that have breasts which contain a combination of fat and glandular tissue which is particularly dense under the nipple, many surgeons feel that liposuction alone is not adequate. The use of open incisions around the nipple is often used to remove this glandular tissue, often causing unsightly scarring or inversion of the edge of the nipple from scar contracture.

Having worked with Smartlipo in my Indianapolis plastic surgery practice for a while now, I have found that open excision of subareolar glandular tissue can often be avoided with its use in some cases. Some have dubbed this scarless male breast reduction. 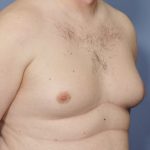 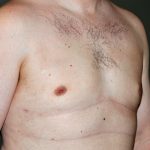 By using Smartlipo only, it is possible to now break up hard glandular tissue and remove it through the suction cannula used to perform liposuction. This procedure takes about an hour or so to do. Depending upon the patient, their age, and transportation issues, it can be done with either a local,twilight anesthesia or general anesthesia  on an outpatient basis. Most scarless male breast reduction patients can return to a sit down job within days or a more strenuous one in several weeks. There certainly will be some discomfort but the heat from the laser makes it less than what I have seen with traditional liposuction. There is no question in my experience that the pain and bruising is definitely less.

The concept of scarless male breast reduction refers to avoiding any incisions around the areola. There does have to be some small entrance sites for the laser probe but these are at the sides of the chest wall. These incisions are left open to drain after surgery which is different than traditional liposuction. They will drain for 24 to 48 hours and consists of liquified fat (oil) and some blood. This drainage is actually a good (but potentially messy) thing as otherwise it would have to be absorbed by the body which would prolong swelling and bruising. Under the applied chest wrap at the ene of the surgery are absorbent pads to catch this drainage. These small scars close down quickly and actually heal the same later as if they has been sutured.