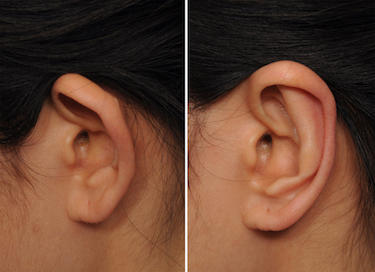 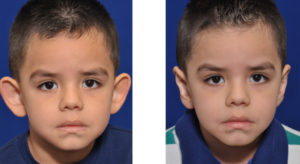 Otoplasty or ear reshaping surgery for prominent ears has a long history of over a century of clinical experience. Since its early inception the focus has been on changing the shape of the cartilage which makes up almost the entire ear with the exception of the earlobe. How to reshape the ear cartilage has been described using numerous methods from suture bending, cartilage excision and cartilage scoring. No single cartilage manipulation technique has been shown to be necessarily superior to another. The optimal otoplasty technique still remains largely surgeon dependent and preference.

In the July 2019 issue of the journal Plastic and Reconstructive Surgery an article was published entitled ‘Refinement in Otoplasty Surgery: Experience of 200 Consecutive Cases Using Cartilage-Sparing Technique’. In this clinical paper he authors describe their experience in a large series of patients with 362 ears treated  using a variety of techniques including a modified Mustarde and Furnas techniques. The key points to their technique include a minimal skin resection, wide exposure from conchal base to helical rim, conchal-scaphal horizontal mattress sutures, conchal-mastoid sutures, and a single layer closure leaving a small bottom area open for drainage. One key element in the technique by it7s absence is that cartilage is not excised or scored, only shape changing sutures are placed.

Complications in this series included hematoma (1%), suture extrusion (8%), relapse/recurrence (4%), and hypertrophic scars/keloids (2%) Collectively this amounted to a 15% complication rate. Asymmetries or over correction was not reported  in any patient. 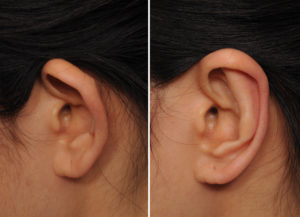 Having performed otoplasty surgery for the past twenty-five years, this paper has distilled most of the techniques that has evolved in my experience. First, there is no benefit to a lot of postauricular skin excision, only a miming strip needs to be removed. Second, wide cartilage exposure is needed particularly out to the helical rim and posterior to the mastoid fascia. Third, conchal-scaphal and conchal-mastoid permanent sutures can do all the work of the otoplasty. Only in the rare case of a very stiff conchal cartilage in older patients is weakening or scoring the cartilage ever needed. I would agree that lobule repositioning is probably the most overlooked aspect in a setback otoplasty. Whether it is best done by lower cartilage suturing or skin excision can be decided on an individual patient basis. The one minor technique that I have not employed is to leave the lower end of the incision open to allow for drainage. That seem seems to be an innocuous maneuver that may allow for less bruising/swelling afterwards.