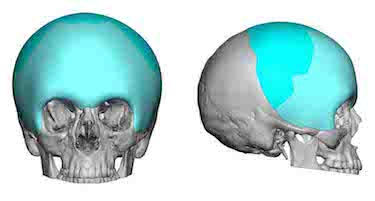 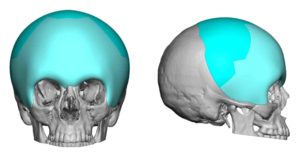 Custom facial and skull implants provide broad surface bone and soft tissue coverage with implant designs that can not be achieved with standard preformed implants. This almost always means the implant covers a larger surface area than standard implants, not necessarily that it is thicker although it may be. Because these custom implants are bigger, patients often ask questions or have concerns that they might not otherwise would have with smaller sized implants. 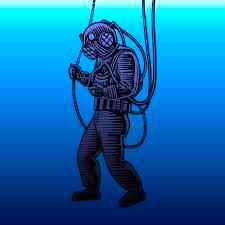 One such question/concern comes from professional divers who use helium-oxygen mixtures and have to undergo decompression on emerging from the dive. Helium is added to the breathing mixture of oxygen and nitrogen to reduce their proportions to below that of air which allows the gas mixture to be inhaled safely during deep dives. The presence of helium allows lower nitrogen and oxygen levels to prevent nitrogen narcosis and oxygen toxicity during deep dives.Their question is whether the silicone implant could absorb the helium and cause either catastrophic failure of the device or, more relevantly, have the absorbed helium re-enter the bloodstream during dive emergence.

To answer this question we must refer to to the Periodic table and investigate the two elements involved. Helium, element #2,  is the second lightest and second most abundant of all the elements. It is an inert gas and sits at the top of the Noble gas group. It is the second least reactive gas after neon and the second least reactive of all elements. As a member of the noble gases, which are characterized by filled valence orbitals, the maximum amount of electrons are carried in the outer shell of the atom. This arrangement is why noble gases are inert having limited capability of interacting with other compounds. Because of its very small molecular size, however, it can diffuse through solids and this raises the question whether the silicone implant can absorb helium in any significant amount.

Silicon, element #14, is the seventh most abundant element on Earth and does not exist in an elemental form in a custom face or skull implant. Rather these implants are composed of silicone, which is a synthetic polymer with a silicon-oxygen backbone with organic side groups attached to it. While these silicon-oxygen bonds are fairly tight and resistant to separation, silicone compounds are well known to have high gas permeability.

Even though helium does enter the blood stream during deep diving, it is an inert gas which doesn’t react with much of anything. It does displace oxygen for uptake into the lungs but in an oxygen rich gas mixture this is not significnat. Similarly the silicone material is also fairly inert and doesn’t react to much either. The question is whether the helium can cross the blood-tissue barrier and get into the implant in any significant amount  and that answer appears to be no. Silicone, while gas permeable, is in a liquid rich environment (the tissues) which is to the same as outside the patient. It would be difficult for the silicone to extract the helium from the blood since it doesn’t have more to “offer” to helium than the oxygen in the blood.

It is also important to point out that there are several key silicone components associated with diving equipment such as tank O-rings, regulator components and the dive mask. If these components were adversely affected by helium exposure,  this could cause serious injury and/or death to a commercial deep sea diver breathing helium/oxygen mixed gas. Since these components are still regularly used in diving, I don’t see how a silicone implant within the body of a diver would pose any threat to the diver or to the implant itself in any way.

When this questions was posed to silicone chemist with lifelong experience in medical device manufacturing, he had the following comments. ‘Silicone is one of the most inert materials on the planet and Helium is an inert gas. The possibility of those two inert substances interacting in some deleterious way is difficult to imagine. In my 30 years of silicone medical device experience, I have never heard of any inert gas interacting with a silicone device. Cured silicone is permeable to certain gases and Helium is one of them, but both silicone and helium are inert and non-reactive. Permeable does not mean interactive, of course, so even if Helium were to pass through the silicone device it would cause no reaction. In the diving environment I have trouble figuring out how the two would meet, other than through the blood stream. But silicone devices do not vascularize so there shouldn’t be any regular blood/device interface.’

In conclusion, there doesn’t seem to be a way that can be chemically envisioned by which helium can interact with an implanted silicone device during an ocean dive. Thus custom skull and facial implants are perfectly safe for the commercial deep diver regardless of the gas mixture inhaled.