Facelift Techniques in the Bald or Shaved Head Male 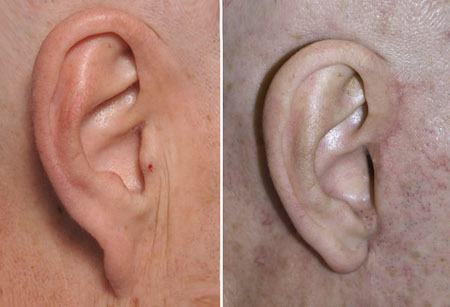 Facelift surgery involves numerous technical maneuvers that influence both its immediate and long-term results. Much focus over the years has been on manipulation of the SMAS layer under the skin and many variations of its dissection and fixation have been described. But one of the core principles of facelift surgery is the placement of incisions around the ear. No matter how well the rest of a facelift is performed visible scarring around the ear that distorts the earlobe, tragus or hairline can mar the entire result. 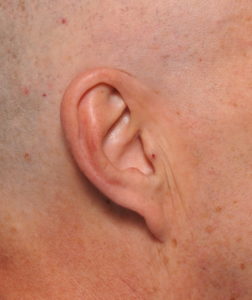 In no patient is the placement of facelift incisions more critical than in the male patient, particularly one who is bald or shaves his head. There is such visibility of the skin around the ears that scar placement must be different than what is typically used in a female patient.

In the January 2020 issue of the journal Plastic and Reconstructive Surgery an article on this topic was published entitled: ‘Face Lifting in Bald Male Patients: New Trends and Specific Needs’. In this clinical paper the authors performed a retrospective study over ten years on sixty-eight (68) bald males who underwent a specific type of deep plane facelifting with one year followup.

The facelifting technique consisted of pretragal incision in front of the ear and a postauricular sulcus incision that did not extend beyond the shadow of the helical rim of the ear. Subcutaneous skin flaps were raised 6 to 7 cm anteriorly and 8 to 10 cms behind the ear. A high superficial SMAS flap was usually done with deep dissection underneath it to the midline of the neck and but more limited in the cheek. A split SMAS flap was used for both purely vertical as well as posterosuperior pull with firm fixation to periosteum to fascia. Fibrin glue is applied prior to skin closure. It is also noted that they use clonidine transdermal patches applied preoperatively. Postoperative results were assessed by FACE-Q questionnaires.

Complications included two hematomas, two temporary buccal facial nerves palsies and five hypertrophic postauricular scars. All patients had a high degree of satisfaction with the results at one year after surgery and the final appearance of the scars. 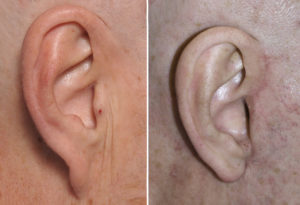 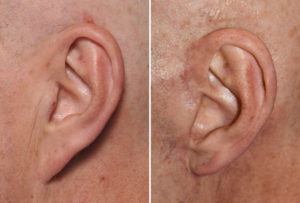 The key in the clean shaved head of a male facelift patient is that the incisions must become shorter both in front of and behind the ear. The incision behind the ear must not extend beyond that of the shadow of the helical rim of the ear. By limiting this incision the effect on the neck may also become somewhat less. While in this paper the preauricualr incision headed some distance north of the ear, I would be cautious in so doing. As even these incisions, which usually heal well, are in a very exposed area.