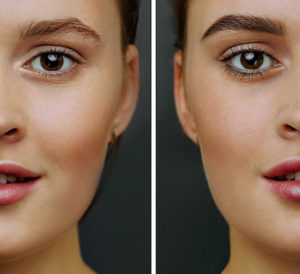 Facial feminization surgery (FFS) has become a well recognized approach to changing the male face to a more feminine appearance. FFS is a collection of procedures of facial reshaping procedures for which each patient may receive some but not all of the surgical options available. While the procedures have been well described it is presumed that they are successful when performed. Most patients express satisfaction with the surgical outcomes but it is never been studied as to whether the public views such changes as successful.

In the July 2020 issue of the Aesthetic Surgery Journal an article was published on this topic entitled ‘Facial Feminization Surgery Changes Perception of Patient Gender’. The objective of this study was to see if facial feminization surgery changed the perceived gender of patients from a the general public standpoint. An online survey was created with pictures of cis-gender males and cis-gender females as well as before and after patients who underwent facial feminization surgery. Survey participants were asked to identify the pictures shown as either female or male as well as to assign a confidence level as to their appearance on a masculine to feminine numeric scale.

While patient satisfaction is viewed as the most important barometer of any elective aesthetic plastic surgery procedure, facial feminization surgery is a bit different in that regard. Since the goal is to create an appearance that is perceived as feminine by those other than just the patient, evaluating that success is an important objective measurement. This study demonstrates that FFS surgery does change the gender perception by others in a very positive way. It is far more effective than non-surgery techniques alone as might be suspected and as this study has documented.

What I also found interesting was what were the most common FFS procedures performed. The vast majority of patients received central brow bone setback with lateral orbital rim reduction, browlift, bony chin reshaping, jaw angle reduction rhinoplasty, upper lip lift and fat grafting. Based on the perception of gender appearance change that these procedures are the back bone of many FFS surgeries.