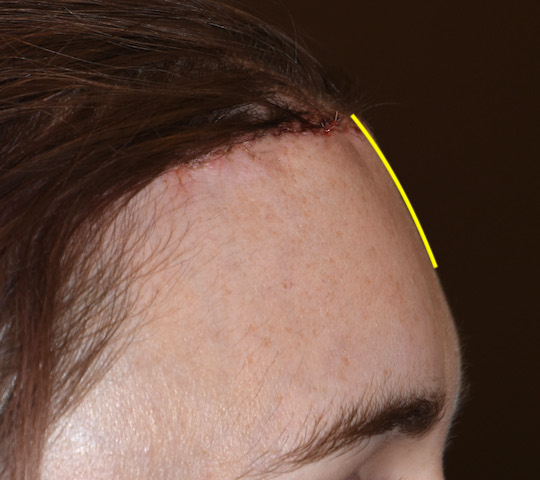 A long or high forehead based on the location of the frontal hairline creates a disproportionately large upper third of the face. While acceptable in males because of common hairline recession/loss, it is much less aesthetic in females. Shortening of the upper facial third by frontal hairline advancement (scalp advancement) is one form of forehead reduction that is very common in the male to female conversion patient. How much the hairline can be advanced is dependent on the natural flexibility of one’s scalp. (1.0 to 1.5cms)  The most significant hairline advancements are created by a first stage scalp expansion procedure where the occipital scalp (not the scalp right behind the hairline) is treated by he placement of a tissue expander. Subsequent tissue expansions are done for 4 to 6 weeks prior to the definitive forehead procedure. This can permit up to 3 cms of hairline advancement to be achieved. Some hairlines, however, may not always permit this to be done due to a lack of hair density. But when possible a pretrichial incision permits a simultaneous brow bone and vertical skin forehead reduction to be accomplished. 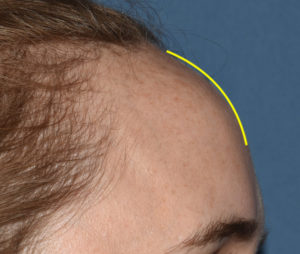 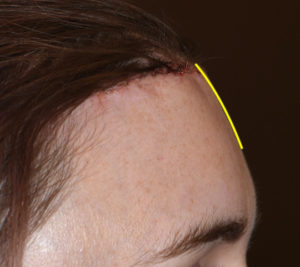 The other form of forehead reduction is to manage its bony shape above the brow bones. Frequently overlooked are the shape of the central bony forehead and the lateral bony temporal lines. Some patients may have frontal bossing or a bowed out upper forehead area. While it is more common to build out the upper forehead to create a more feminine straight and convex forehead, there are patients where the bony projection of the upper forehead needs to be lessened to complement the brow bone reduction change. The thickness of the frontal bone will permit a 5 to 6mms reduction which will suffice in most patients to reduce any visible prominence.

Such bone shaving  can be done to help create an increased convexity of the forehead shape by eliminating the visible ridge of the temporal lines. The temporal lines is the conversion area of the bony forehead to the soft tissue temporal muscle and fascia. In men this is more pronounced and burring it down helps create more of a side to side convex forehead shape. 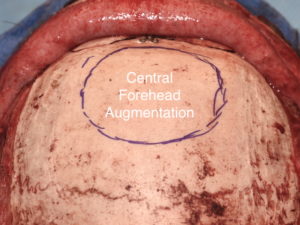 In some patients with a flatter central forehead plateau, building it up with a small amount of bone cement (combined with temporal line reduction) is a dual approach to creating a more feminine forehead shape.