The anatomic structure of the face is well known to change with aging from the outer skin down to the bone. This recognition of how the face ages provides for more effective treatment strategies. While once skin pulling and tightening was the only treatment approach, the understanding of the loss of fat with aging has led to the addition of fat grafting as part of anti-aging facial surgery. 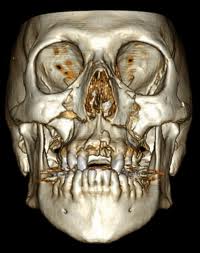 In the August 2017 issue of the JAMA Facial Plastic Surgery Journal an article was published entitled ‘Patterns of Change in Facial Skeletal Aging’. In this paper the authors studied CT scans of over a dozen adult faces (ages 40 to 55) who had such studies done at least eight years apart that included the skull down through the midface. Measurements were made using landmarks on 2D scans as well as 3D reconstructions. Specifically, glabellar and maxillary angles as well as pyriform height and width were studied.Their results showed significant decreases in glabellar angles (- 2 degrees on average) and maxillary angles. (around 2 degrees on average) There were increases in pyriform width and height as well.

While the bony changes with aging has been studied before, this study is relevant because it assessed the same patients over different time periods. Opening up of the glabellar and maxillary angles as well and increases in pyriform height and width are signs of bone loss/atrophy. Such midface changes can be more severely affected with the loss of teeth although this was not specifically evaluated in this study. (I assume their patients had a reasonably intact maxillary dentition)

The real relevance of this study is whether some patients may benefit by bony augmentation as part of their anti-aging facial surgery. Specifically midface augmentation of the premaxillary-paranasal region may be considered. This could be especially helpful for the patient with deep nasolabial folds and a recessed nasal base.