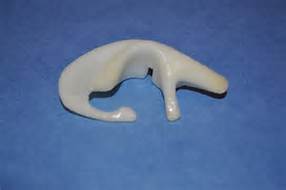 Both microtia ear reconstruction methods have their own unique advantages and disadvantages. The Medpor ear reconstruction framework offers the advantages of a well-shaped preformed ear framework and the avoidance of a donor rib scar and harvest site. Because it is a stiff material, however, it can feel fairly rigid. The rigidity of the wedge on the back part of a Medpor ear framework, which allows it to have good projection from the side of the head, can be a source of ear stiffness and rigidity.

While many rib graft microtia reconstructions need projection and a more rigid graft placed behind it, a synthetic framework often needs the opposite. The preformed framework provides good projection but at the expense of ear stiffness. The ear is made of flexible cartilage that springs in and out and that is a feature that a plastic material can not do.