Protruding nipples can occur because of they naturally develop, induced to grow by pregnancy and breastfeeding, or inadvertently become more obvious by the placement of breast implants. Nipple hypertrophy can be managed by a variety of  products to help flatten and hide their prominence. These are usually circular silicone shields which, when applied to your skin, stay in place and help conceal your nipple in clothes. They are relatively inexpensive and go by such interesting names as ‘low beams’ and ‘top hats’.

But having to be constantly on guard about nipples that appear through clothes can be solved by a simple operation. Nipple reduction is a procedure which surprisingly some women are unaware. The procedure removes a portion of the nipple to make it smaller and is usually done under local anesthesia. The main goal is to reduce its length which makes it less prominent. In shortening the nipple it may also become more narrow in width. 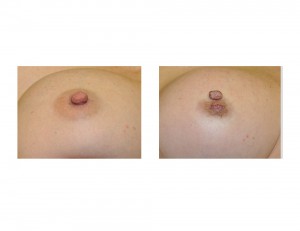 Nipple reduction is done by two basic techniques. Removal of a pie-shaped wedge of nipple tissue is the most common method and can produce the most dramatic change in nipple length. Because it removes a portion of the actual nipple, some sensation may be lost. The other nipple reduction technique is to remove a circular ring of nipple from its sides. This technique is best used for this women who are concerned about any loss of nipple sensation. 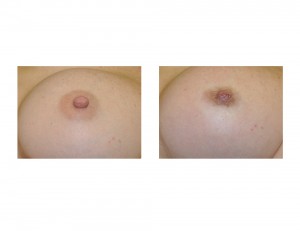 Nipple reduction surgery can be performed concurrently during any other breast procedure from having implants to undergoing a breast reduction. But of there is any doubt about whether nipple reduction needs to be done, deferring it to later does not cause a problem. It can always be done in the office later under local anesthesia.

The need for nipple reduction is a subjective one. Nipples that are easily detectable in thinner bras or under clothing without a bra can be a source of embarrassment. The good news is that this is a problem which can be simply solved in less than thirty minutes.