The size and shape of a man’s chest can be a source of pride or embarrassment. Much emphasis on the aesthetics of a masculine chest is based on the pectoralis muscular anatomy. While this muscle provides support for the overlying skin, and clearly its size and border outlines are important, the lone remaining aesthetic feature is that of the nipple. While a man’s nipple is usually much smaller than a woman’s, it can have numerous aesthetic deformities which are both bothersome and embarrassing.

The male nipple has the same anatomic features as that of a female, a centrally elevated nipple and a surrounding areola. Men typically have much less nipple projection, even when stimulated, and a thin width to the surrounding areolar circle. This is no surprise given that it has no lactation function and has no purpose in being any larger. But despite its small size, it can have a series of aesthetic problems that men would like improved. 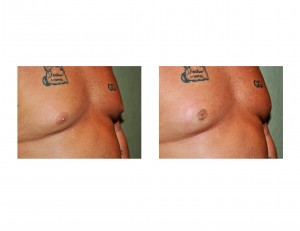 Nipple protrusion, or the overly projecting nipple, is a frequent source of male embarrassment. For some men, the nipple sticks out all the time. For other affected men, the protrusion is only bothersome as it occurs with stimulation, particularly when one is cold. Sticking out through shirts is the common complaint which brings men in for a nipple reduction procedure. Men want a completely flat nipple that does not become erect at all. A nipple reduction is a simple procedure that is performed in the office under local anesthesia. To be more accurate, it should be called a nipple amputation or nipplectomy. While a nub of nipple can be retained, most men want it completely gone and flat. Removing the nipple through a wedge excision to include the ducts and bringing the areolar edges together is the surgical technique. 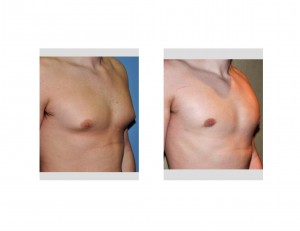 A different form of nipple protrusion is that of the puffy nipple. The puffy nipple is not protrusion of the nipple but that of the entire nipple-areolar complex. This is caused by breast tissue pushing out from behind. This is known as areolar gynecomastia, a small form of breast tissue enlargement that causes visible projection of the overlying nipple. This is commonly seen in young men who desire a completely flat chest profile. This is treated by an open excisional approach through a lower areolar incision. The breast tissue is directly excised and feathered into the remaining breast tissues beyond the areolar margins. This is the smallest form of gynecomastia that is treated. Care must be taken during the procedure to not over-resect the breast tissue, causing a nipple inversion problem later.

The sagging or ptotic nipple is a problem of older males. As the chest tissues lose volume and sag, the nipple sits much lower on the chest wall. This is caused not by the nipple sagging per se, but by the entire chest skin on which it sists falling off of the muscle and ribs so to speak. This can be improved through a nipple lift procedure. By removing a crescent of skin above the nipple, the nipple is lifted upwards into a higher position. There is a limit to how much movement can be done, often being no more than 10 to 15mms upward. While greater upward nipple movement is possible trough different patterns of skin excision, this results in scars that extend downward from the nipple. This is usually not an acceptable trade-off for most men. 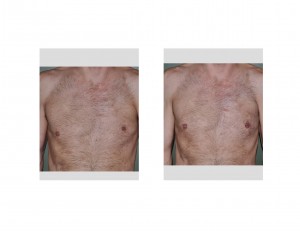 Nipple asymmetry can also occur due to either congenital deformities or some more natural amounts of chest asymmetry. Nipple asymmetries can occur in either horizontal or vertical dimensions. Most commonly, it is the difference in their horizontal positions that is disturbing. It can involve just one nipple or both. Based on the movements needed to move the nipples to more symmetric positions determines where on the nipple circle the crescent skin excision is oriented. Often moving both nipples, splitting the difference in the asymmetry, is the best way to get the most symmetric result.

Male nipple deformities can be easily treated and improved, many of which can be treated  under local anesthesia with virtually no recovery.