The Effectiveness of Male Nipple Reduction

While men have nipples just like women, they serve no functional purpose. Men do not get pregnant nor do they have to breast feed so the role of the nipple-areolar complex is essentially decorative. While men may look peculiar if they did not have nipples, because we are used to seeing all humans with them, they are present in men as a result of pure genetics. The XY chromosome that men have does not start emitting testosterone until over a month into pregnancy. But up until that point the embyro acts like a female, creating nipples which persist even after the male develops more masculine features such as testicles and a scrotum.

While the make nipple serves no purpose it can be a source of irritation. Protruding nipples can be a source of embarrassment both in and out of shirts and can also end up irritated and sore due to abrasion on clothing. I recently watched the end of the Indianapolis marathon and saw several men who had actual blood on their shirts from chronic nipple irritation that eventually caused them to bleed. I would imagine it would take days for such nipple ‘sores’ to eventually heal and become non-tender. 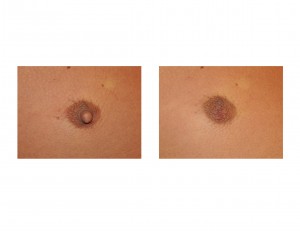 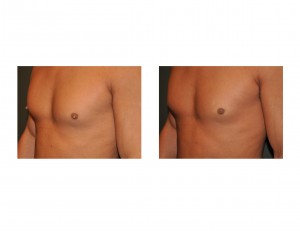 The good news is that protruding male nipples can be very effectively and simply reduced to provide a permanent resolution to these concerns. Under local anesthesia the nipple can be reduced through a vertical wedge excision at its base. This is actually closer to a ‘nipplectomy’ or complete nipple removal so that only the surrounding areolar base is left. For most men this is a very acceptable trade-off since they want the flattest nipple profile as possible. Since the nipple is usually a lighter color than the surrounding areola, close inspection may be able to detect that there is actually little to no nipple present. But this minor aesthetic alteration is irrelevant to those men affected by the symptoms of enlarged nipples. 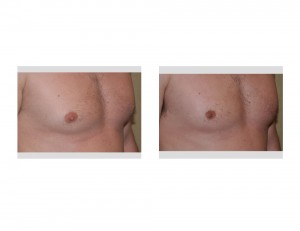 Male nipple reduction provides an immediate and permanent solution to an anatomic structure whose presence is a mere quirk of a brief genetic window in utero. In less than an hour the procedure can be completed. Dissolveable sutures are placed so no followup for suture removal is needed. One wears bandaids for a few days, can shower the next day, and does not need any after surgery restrictions of activities.