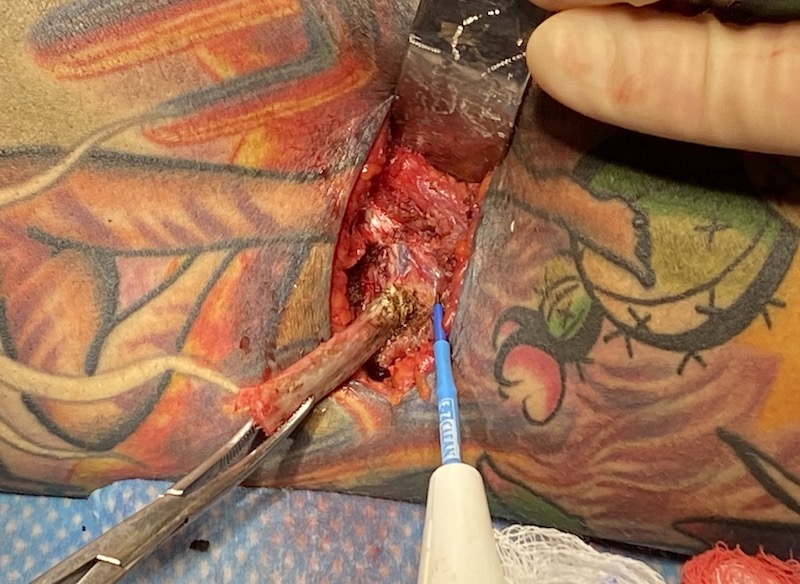 Rib removal surgery is an all out effort to maximize waistline reduction. To bring in the sides of the waistline the most that is humanly possible a multilevel tissue reduction/removal approach is used. From the skin inward to the abdominal wall are the layers of fat, muscle and  rib. Each tissue element can be modified to collectively create the result. 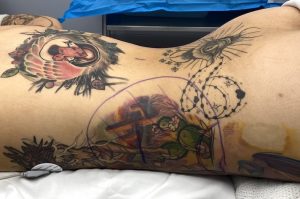 Because rib removal is done in the prone position this is the best opportunity to reduce flank/love handle fat. This is the first step in the surgery. It is important to do this first since the incision is going to be made right through the liposuction-treated area. It is al ways interesting in that no matter how much liposuction has been done previously there is always more fat that can be removed. Typical aspirates range from 50cc to 200ccs per side. Despite the volume of fat removed many patients take this as an opportunity to inject it into the buttocks, hips or breasts. While her volume injected is never large it is always better to recycle it than discard it.

The next layer encountered is the various muscle layers which become evident once the incision is made. The first muscle layer seen is the latissimus dorsi with its oblique fibers heading towards the posterior iliac crest. Because this muscle layer must be traversed to get to then ribs, I remove a strip of the muscle from its outer border. Usually this strip is about 1 to 2cms in width. It is important to remove this muscle strip above and below the incision as much as possible for a smooth contour. 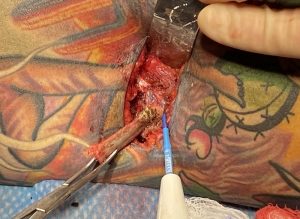 Once past the latissimus dorsi muscle the lower ribs can be palpated. The ribs that have the greatest value in waistline reduction are #10 and #11. Rib #12 is the shortest rib and often is so short that its removal is irrelevant to the goal. These ribs surprisingly point always completely downward at a greater than 70 degree angle. Some times they seem to be almost at 90 degrees to the line of the incision. Removing of the outer half of these ribs is done by a tunnel technique. This is how the length of the ribs can be removed through an incisional length that is much smaller than their length. At a proximal point the rib is circumferential dissected out at the subperiosteal level. Once cut the rib is turned 90 degrees and dissected out with electrocautery until its cartilaginous end/attachment is encountered. It is then released from the cartilage and removed. 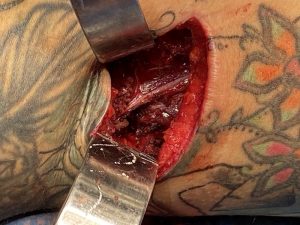 One important element in the rib dissection is to preserve the intercostal nerve which is located along the rib’s inferior border. This will prevent the potential for a postoperative neuroma and also allows an Exparel-soaked sponge to laid up against it to manage postoperative discomfort. 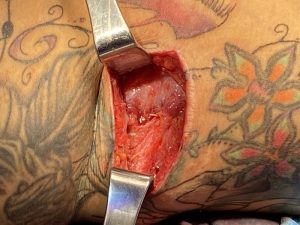 Each rib section removed is closed over by the posterior serratus/intercostal muscle cuff that was opened to access it. The new more inward outer border of the latissimus dorsi muscle is then plicated down with sutures to produce the final narrowing effect. 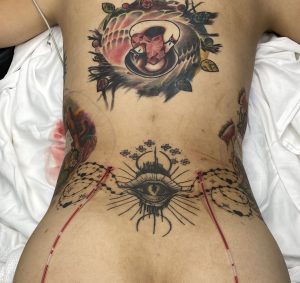 Rib removal surgery is a bit of a misleading name since it does not fully describe what is actually done during the surgery. While the rib removal is the most recognized part of the operation, its effects are magnified by the addition of fat and muscle manipulations as well.