The size of the nipple on a man’s or woman’s chest is often unnoticed, until it becomes too long. A long nipple, known as nipple hypertrophy, can be both a source of embarrassment and irritation. It can be challenging to hide under light clothing and leads to chronic irritation and chafing from rubbing against clothing. For these reasons, both men and women seek nipple reduction surgery.

Nipple hypertrophy (macrothelia) is more frequently seen in Asians and less common in Caucasians. Why a nipple grows long is not known. There is some familial association to it and it can appear after adolescence or following pregnancy. It is almost always bilateral although one-sides long nipples do also occur. Once it develops, the long nipple persists throughout life and does not recede.

The nipple has a specific set of desired shapes and sizes. The ideal nipple has a cylinder shape with a “dome-like” top with projection between 6-10mm in women and between 3 and 6mms in men. . The nipple in women can be aesthetically tolerated to be longer in women than in men. and is often naturally so for the obvious reason for or as a result of breastfeeding. However, in cases of nipple hypertrophy lengths can be up to 2 cms in women and 1 cm in men.

Nipple reduction surgery is relatively simple given the small surface area of its projection. When planning for a nipple reduction surgery two factors are important to take into account for women, nipple sensation and preservation of lactation. For men, none of these functional issues apply. Procedures available include the classic wedge amputation technique which involves excision of the nipple core that cuts through the lactiferous ducts and disrupts lactation as well as reducing nipple sensation. There is also the sleeve resection method where a strip of tissue is removed from the base of the nipple without cutting across its core. This nipple reduction method preserves nipple sensation and theoretically preserves lactation as it does not disrupt lactiferous ducts. 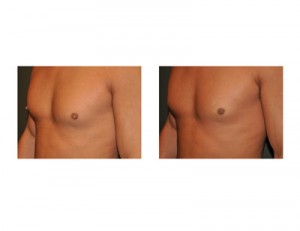 Male nipple reduction always uses the wedge reduction technique as men want as flat as nipple as possible. It is not important to them whether any residual nipple projection is left nor is preservation of sensation an issue. While the wedge reduction technique is simple, one has to be careful to not take too large of a wedge as an inversion deformity can result. Loss of the color difference between the nipple and the areola will occur although this is not an aesthetic concern. It can be comfortably done as an office procedure under local anesthesia. 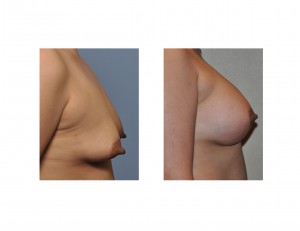 In summary, nipple reduction is very effective and the scars are hidden in the nipple-areola junction. It has  no real recovery and can be safely combined with an other forms of breast or chest enhancement surgery.