OR Snapshots – Calf Implants and the Sural Nerve 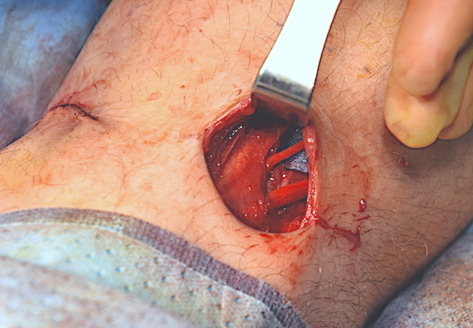 Calf implants are placed on top of the gastrocnemius muscles but under their overlying enveloping fascia. To place the implants separate small incisions are placed on the back of the knee in the popliteal crease above each muscle head. From the incision to the gastrocnemius fascia it is necessary to dissect past the semimembranous/semitendinous tendons which creates a stair step or oblique line of access. In so doing it is not uncommon to see nerve branches during the course of this dissection which are specifically that of the sural nerve.

The sural nerve is a well known sensory nerve that runs down the back of the leg over the calfs. It supplies sensation to the skin over the lower third of the shin and out onto the side of the foot to the little toe. While often described in pictures and textbooks as having a seemingly simple and consistent course over the calf muscles its arrangement is actually quite complex and variable. In the upper calf area there are actually two sural nerves, the medial and lateral cutaneous sural nerves. Like a Y, they eventually join into a more common sural nerve that then runs down the middle between the two bellies of the gastrocnemius muscles. 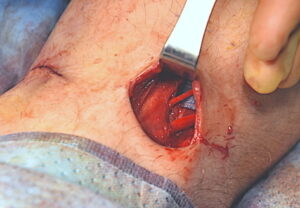 I have seen lots of lateral sural cutaneous nerves when performing lateral or outer head calf implants. But for inner or medial head calf implant placements seeing large branches of the nerve is not common at all. The medial cutaneous sural nerve comes from the tibial nerve in the popliteal fossa. It descends down 3 to 5cm from the popliteal fossa before going between the two gastrocnemius muscle heads beneath the fascia. It is generally believed that it is the medial cutaneous nerve that eventually becomes the major contributor to the more distal common sural nerve  between the two calf muscles and heads towards the outside of the ankle on its way to the side of the foot.

While the presence of these nerves can not be avoided in the dissection for the placement of calf implants, it is important to preserve them and be as gentle as possible with their retraction. As a result it is always possible that some temporary numbness of the skin may be possible in the outer lower leg and side of the foot after surgery…although this seems to be uncommon. It is also possible that some temporary weakness of the abductor digiti quinti muscle (which cause flexion of the little toe) may occur due to the anomalous presence of motor fibers in the medial cutaneous nerve branch. This is not an occurrence I have yet seen but is theoretically possible.