Facial implants, like every other surgical technology, has evolved over the years. From surgical methods to place them to the actual implant shapes, what we use today is understandably different from what was done decades ago. Every now and then this becomes evident when treating an ‘older’ patient, who often presents for facial rejuvenation today, but had facial reshaping surgery (implants) when they were much younger.

old cheek implants mobility left side Dr Barry Eppley IndianapolisThis was illustrated in a recent case where a female presented for a variety of facial procedure including replacements of her old cheek implants. These cheek implants were placed over 30 years ago and they were far too prominent/pointy for a female face. Preoperatively it was not known what style of cheek implant she had but they had one interesting feature…they were freely mobile over her cheeks. This would not be considered a normal cheek implant result by today’s standards.

This indicated that her cheek implants were not on the bone but up into the cheek soft tissues. While that concept is incongruous today with how to place facial implants at the subperiosteal level, decades ago placing them off the bone was not unheard of. In removing them from an intraoral approach this turned out to be an accurate assessment of their cheek position. Interestingly calcifications appeared on the implant’s surface even though they were not on the bone. 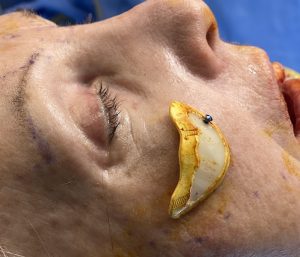 To improve her current cheek implant outcome, new small submalar style implants that had an ePTFE coating (composite cheek implants) were chosen as the replacement. (the implant was modified to give it a little less projection…hence the removal of some of the coating) A screw was preplaced into the implant for bone fixation.

Facial implants that are decades old and are no longer manufactured are known as legacy implants. This is seen a lot in breast implants but similarly exists as well in facial implants. When a decades old facial implant is removed its shape and material composition are often different from what we know today. In this case of legacy cheek implants how they were placed into the tissues also represented an old surgical method/belief that it is was better to have them not sitting on the bone. This explains why they were freely mobile on top of the cheekbones.