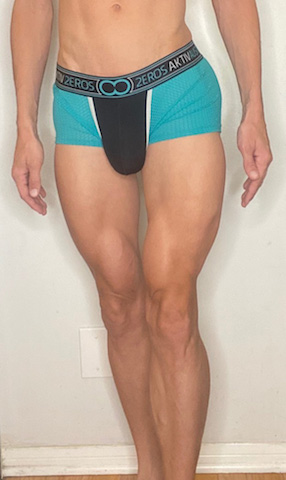 Background:  Aesthetic leg augmentations most commonly are done in the lower half of the leg for the calf muscles. The medial and lateral gastrocnemius muscles have a longitudinal orientation with an enveloping fascia. Because the muscle needs to slide within this enveloping fascial sheath for extension and flexion, a subfascial pocket can be created into which an implant can be placed. This creates an external appearance of an enhanced muscle size.

But the upper leg also has ongitudinal muscles with enveloping fascial sheaths which can be similarly augmented. The quad muscles are located at the front and sides of the anterior thigh and consist of the rectus femoris, and the vastus lateralis, medialis and intermedius muscles. These are strong muscles that are primarily responsible for hip extension and flexion at the knee joint. They are prone to muscular hypertrophy by exercise as demonstrated by body builders and athletes. As a result these are the targeted muscle for aesthetic augmentation.

When augmenting the quad muscles it is important to note that the recovery will primarily affect knee flexion and extension  as that is their primary role in lower leg movement. As the calf muscles are responsible for plantarflexion of the foot and ankle, combining thigh and calf muscle implants in a single surgery makes for major limitations in walking in the early recovery period. 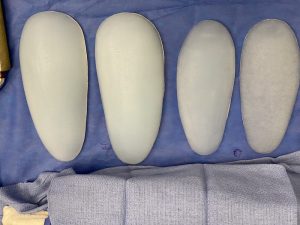 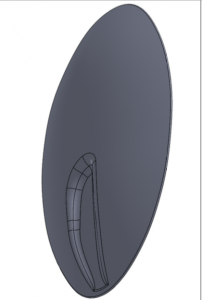 Case Study: This male desired to have both anterior thigh and posterior calf muscle augmented in a single surgery. Standard calf implants were used for the inner and outer gastrocnemius muscles as well as the vastus medialis.  A  custom implant was computer designed designed for the rectus femoris-vastus lateralis muscle complex. (29 cms long, 15 cms wide and 400ccs in volume. 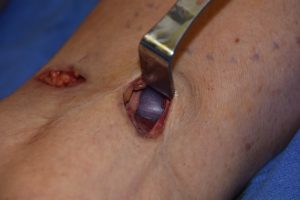 Under general anesthesia and in the prone position inner and outer popliteal skin incisions were made through which medial and lateral gastrocnemius implants were placed. 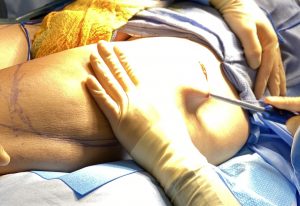 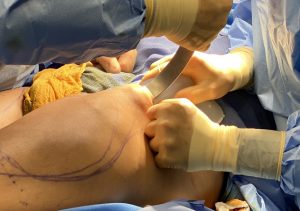 Once the calf implants were completed he was turned back over into the supine position for the placement of the thigh implants. Through a curved 5 cm upper thigh incision the fascia of the rectus femoris and vastus lateralis was opened and a long implant pocket dissected out. The custom thigh implant was then inserted on each side. 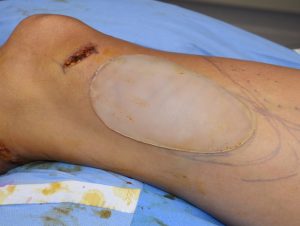 Lastly the vastus medialis implants were placed through a curved 3cm suprapaellar skin incision on the medial side of the knee. 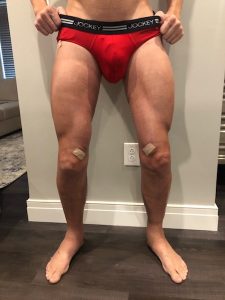 The recovery process as challenging as considerate swelling of the lower legs and ankles occurred as expected. Getting out of bed in the first week was difficult as well as walking. Drains for the large thigh implants remained in placed for ten days. It was necessary to aspirate bilateral thigh and one vastus medialis implant fluid collections several times after the drains were remove. He went home three weeks after the procedure when he could walk again easily. 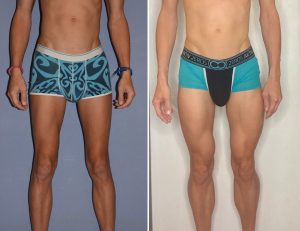 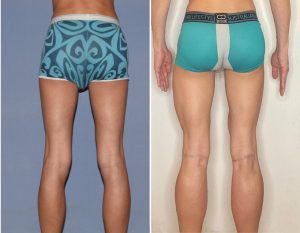 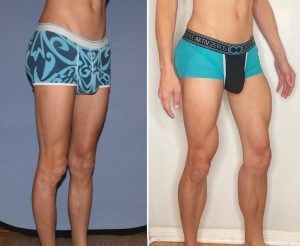 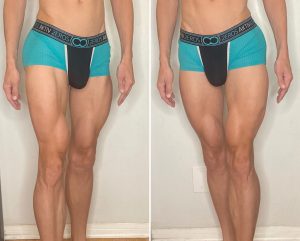 His long term results showed the effects of the eight leg implants placed. A spectacular result associated with a similarly spectacular recovery period.

1) Aesthetic lower leg augmentation is historically associated with the calfs but the thighs offer an opportunity to do so as well.

2) Thigh muscles that can be successfully augmented include the rectus femoris, versus laterals and the vastus medialis.

3) Combining upper and lower leg implants in a single surgery poses challenges during the recovery phase.