Skull reshaping entails a variety of different procedures to effect minor to major head reshaping. Such procedures can fundamentally be divided into either augmentative or reductive surgery. Skull reduction procedures mainly involve bone but can also include soft tissue as well in some cases.

One such skull area is that of the parietal eminence. This is manifest by a protrusion on the upper back of the head that can stick out, creating a prominence or a point. The parietal bone plays an important role in skull development being its embryologic origin. This may be the reason its development may cause it to stick out more in some people than others. While not pathologic, it can be a source of aesthetic head shape concern particularly in men with short hair or who shave their head. 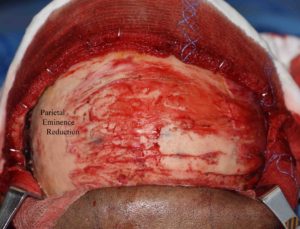 Parietal eminence skull reduction is done through a combination of bone and muscle reduction. The bony prominence can be reduced by burring to round out its shape. It is also helpful to remove the most posterolateral segment of the posterior temporal muscle as well. This not only reduces some of the prominence but also allows the bony reduction to be further extended. While done sometimes through an open corral scalp incision when other procedure merit such an incisional approach, it is often done as a stand alone procedure through much more limited scalp incisions.

The shape of the head from the front view is one that is more rounded with a convex and smoother outline from side to side. Parietal eminences disrupt that shape and are often seen as points or even horns on the side of the head. Parietal eminence skull reduction effectively reduces this small skull area through a combined hard and soft tissue removal procedure.