Aging of the mouth area has been shown to be both a function of volume loss and tissue lengthening. The upper lip lengthens and gets thinner with less volume. The nasolabial fold gets deeper. These well known effects have lead to many rejuvenative treatments to counteract these effects. 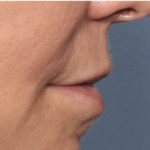 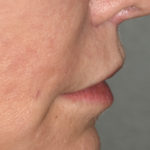 One such perioral aging treatment for a long upper lip is that of of a lip lift. This procedure has been around for decades and numerous minor variations to it have been described. Its limitations are well known with its most of its effects largely being limited to the central lip area and the location of the scar across the base of the nose.

In the May 2019 issue of Plastic and Reconstructive Surgery an article was published entitled ‘Aging of the Upper Lip: Part II. Evidence=Based Rejufenagion of the Upper Lip – A Review of 500 Consecutive Cases.’ In this paper the authors retrospectively reviewed this large number of perioral rejuvenation (combined lip lift and fat grafting) cases done over a four year period. A small number of patients underwent isolated procedures the vast majority had various combinations of lip lift, fat grafting and laser resurfacing.

They describe a subnasal lip lift that is not the typical bullhorn pattern but a crescent design that wraps around the nostrils. The superior portion is done largely intranasal. Skin is removed and the orbicularis muscle left intact. Some undermining of the lower skin edge is done. Closure is done by 5-0 Maxon dermal sutures with a running 5-0 nylon horizontal mattress suture. Microfat grafting is done into the upper lip proper (philtral columns) , the vermilion (white roll) or vertical lip lines. Nasolabial fold fat grafting was done deep onto the canine fossa, the base of the alar rim and out onto the corner of the mouth.

Of the 500 patients treated 94% (470) were women with an average followup of just over one year. There were very few complications and no infections. Only 2 patients of all the lip lifts performed required a subsequent scar revision. A similar low number of patients (5) had any lip asymmetry.

The value of this article lies in the combination of perioral lip procedures to achieve a good rejuvenate effect. While the lip lift serves as the foundational procedure for many patients, concomitant fat grafting adds a lot of benefit as well.