Background: The shape of the female forehead has some different features than that of a male. It has more of a vertical inclination and a rounder and more convex shape from side to side. There is usually no discernible brow bone break due to having smaller frontal sinuses. In contrast a male has slightly more backward forehead inclination, flatter from side to side and has a visible brow bone break.

in creating the rounder and fuller forehead in a female it is important to also consider skull height. The upper forehead must blend back into the top of the head which also provides an opportunity to increase skull height as well. The importance of considering the forehead and skull height together is that the overall convex shape of bony skull surfaces (front, top and back) precludes just augmenting one side or surface without blending into another in an aesthetically successful fashion. Augmenting skull surfaces requires a smooth transition between them, which means a primary augmentation area must at least blend into the adjacent bay surface. 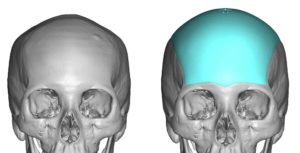 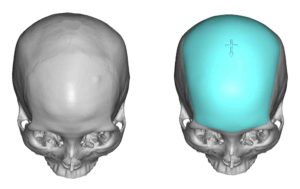 Case Study: This young female want to improve the shape of her forehead which was flat and lack a convex shape with inadequate vertical inclination. At the same time she also wanted to slightly taller skull height across the top. Using her 3D CT scan a custom forehand-skull implant was designed to provide these dimensional improvements. The implant’s total volume was 85cs.

Under general anesthesia an 8 cm transverse scalp incision was made across the top. Wide subperiosteal undermining was done with curved elevators. To do so successfully in the forehead it was necessary to double ponytail her hair and leave the forehead exposed. The custom forehead-skull implant was prepared by placing 5mm perfusion holes everywhere but the forehead.

The implant was folded and inserted. Once it was unfolded under the scalp flaps it was necessary to get it positioned properly. Using the compass marker on the implant and the perfusion with two clamps placed into them, the implant was rotated until it was midline. To ensure that the featured edges were completely unrolled at both ends, and particularly at the forehead, a slit was made in the implant. A long elevator was placed through it so it could get under the ends of the implant to make certain that were flipped up and laying smooth. A critical part of the implant’s positioning was to get it down low enough on the forehead as it was designed to sit.

Female forehead augmentation can be successfully done using a custom implant design. Placing it successfully through a small scalp incisions requires certain maneuvers to ensure it is oriented properly and all edges lay flush with the bone. When doing so through a small scalp incision, where only a very small portion of the implant is actually seen, requires intraimplant positioning  techniques.

1) Rounding out of a flat forehead head in a female requires extending back into the superior skull for a smooth transition.