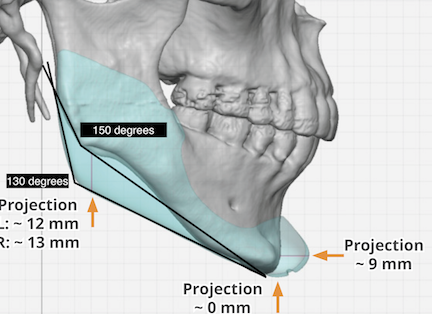 Background: In the male a strong jawline is a desired facial feature. There are no really defective ways to create a strong jawline other than by surgery. This is particularly true in the male who has a naturally weak or underdeveloped lower jaw. Interestingly jaw muscle exercises have been touted as a method to increase the width of the lower jaw over the posterior angles where the masseter muscles exist. However, while the effectiveness of these exercises can be debated, suffice it to say it would be limited and uncertain as to their long-term maintenance of the muscle hypertrophy.

One of the more common aesthetic lower jaw deformities is that of the high mandibular plane angle jaw shape. This is where the lower jaw is rotated up and backwards, creating a high posterior jaw angle and a short recessive chin. In essence, the L shape of the lower jaw is altered to a decreased horizontal position. Correction of the high mandibular plane angle patient requires derotation of the L shape, vertically lengthening the jaw angles and bringing the chin forward.

Case Study: This male presented for lower facial reshaping. He was bothered by his short chin and lower Jaw. He had indistinct jaw angle and a full neck with overall thick facial tissues. He desired and improved lower jaw and neck shape. His 3D CT scan showed high jaw angles and a short and slightly vertically long chin. Comparing his 3D CT scan with his side profile the correlation between his high jaw angles and his facial appearance could be clearly seen. His gonial angle measurement was over 150 degrees. 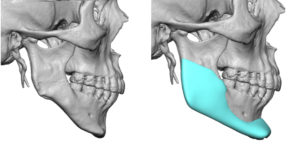 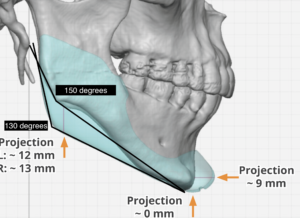 Using his 3-D CT scan a custom jawline implant was designed to bring his high jaw angles down, bring his chin forward and up as well as create a smooth linear connection between the two jaw points. At 12 to 13 mm of jaw angle lengthening per side his gonial angle measurements dropped from 150° to 130°.

Under general anesthesia a combination of a submental and bilateral intraoral incisions were used for implant placement. Because of the size of the jaw angle implant portion a geometric midline split technique was used with a front to back insertion technique. The implant was reunited in the midline through the submental incision and secured with two screws, one on each side of the split. He also underwent multiple facial defatting procedures of the cheeks and neck.