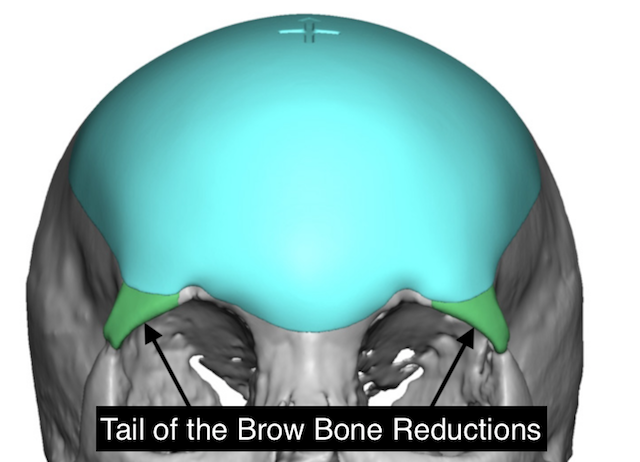 Background: The forehead appears on superficial assessment as a relatively flat surface structure with little to contribution to one’s facial appearance. But in reality it is has a substantial contribution to the shape of the face making up to one-third of its surface area. The three aesthetically important forehead structures are the shape and length of the forehead, the position and shape of the eyebrows and the  prominence of the brow bones. All of these forehead structures can be surgically modified either separately or all together.

The shape of the female forehead, unlike that of males, has a smooth shape from the frontal hairline down to the brow bones. There is no brow bone prominence or brow bone break. The forehead has a more vertical inclination and a rounder shape between the bony temporal lines. When trying to create an improved forehead shape the custom implant approach is usually best as all the dimensions of its shape can be preoperatively determined. The exact dimensional numbers needed to achieve the optimal result in any patient is not an exact science but an appreciation of the shape that may result can be seen in the 3D planning pictures.

The brow bones in most females are centrally flat and rarely develop any significant prominence due to limited pneumatization of the frontal sinus. (compared to males) However some females have brow bone prominences laterally or at the tail of the eyebrow. This heavier brow bone tail produces a more masculine appearance as well as creates a bony platform for a lower tail of the eyebrow position. Reduction of an isolated tail of the brow bone is typically believed to only be able to be done from a superior direction through a coronal scalp incision. But this belief is neither accurate or provides the best directional access for optimal tail of the brow bone reshaping. 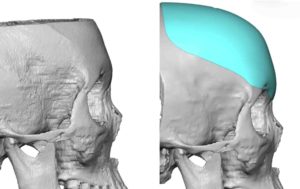 A custom forehead implant was designed from her 3D CT scan. The maximum central forehead projection was 5mms and the total implant volume was 32mms. 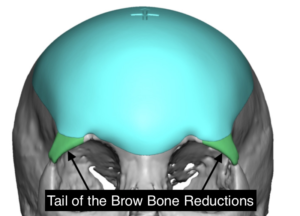 Under general anesthesia and through a 7 cm long scalp incision placed behind the frontal hairline, the custom forehead implant was placed in a subperiosteal pocket in its designed location. Meticulous closure of the scalp incision made an imperceptible incision line.

Then through upper eyelid incisions the tail of the brow bones were reduced both in horizontal projection and in their vertical length, creating a more upward sweep to the shape of the bone. 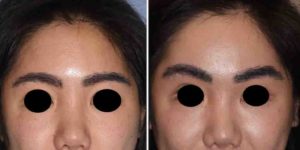 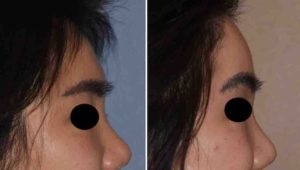 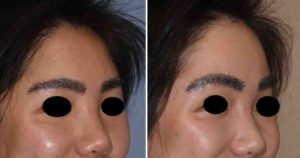 The combination of the addition of forehead volume and the removal of bony projection also creates a desired tail of the eyebrow lift as seen in her six month after surgery pictures.

1) Forehead contouring can encompass changes of the brow bones, the shape of the forehead and the position of the eyebrows.

2) Increased convexity of the forehead is best done by a custom forehead implant design and placement.

3) The temporal or lateral brow bone can be done through an upper eyelid incision.

4) Removal of a horizontally projecting tail of the brow bone helps provide some lift of the tail of the eyebrow as well.