Background: The sliding genioplasty is a well known chin reshaping procedure. Unlike its bigger brother, the sagittal split ramus osteotomy done back at the jaw angles, the sliding genioplasty does not affect the occlusion or any movement of the lower jaw. It is an isolated procedure done just on the chin bone at the anterior end of the lower jaw. While it is a procedure that has been done for a long time, it has received more recent notoriety as part of v-line surgery. In jawline reduction/reshaping the chin part of the procedure is done by an inverted t-shaped osteotomy which may involve some degree of chin bone advancement.

In doing the procedure, particularly if there is any degree of horizontal movement, the natural profile shape of the chin is changed. Normally the profile shape of the chin has variable forms of a convexity. It is usually more of a tear drop shape or a low convex shape. When a sliding genioplasty is done the profile shape changes into a stair step or more angular shape with two 90 degree angles. This chin shape change is well known as can easily be seen during the surgery as well as by the classic stair step titanium plates used for intraoperative fixation.

This change in chin bone shape may seem like merely an irrelevant geometric observation but it is one that persists after bone healing. While the bone edges may become less sharp after healing much of the stair step shape change remains. This bony alteration has numerous potential implications after a sliding genioplasty  including aesthetic deepening of the labiomental fold and scar contracture and chin pad tightness. 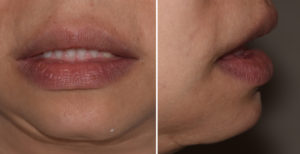 Case Study: This female had a prior history of v-line surgery. As part of her v-line surgery the chin was sectioned into three pieces. (horizontal osteotomy and midline vertical osteotomy) When put back together it was also significantly advanced. Long after she was healed she had symptoms of persistent chin tightness and the profile of the central plate could be seen through her skin when she smiled. She also had developed a lower lip sag with excessive tooth show.

The surgical plan to improve her post bony genioplasty symptoms was to performed a wide soft tissue release, removal of the plates and screws and the placement of an interposition fat graft. To avoid a donor site harvest scar on her lower abdomen it was elected to harvest her buccal fat pads. Given her prior cheekbone reduction osteotomies it was unclear if they were still present.

Under general anesthesia and through the existing intraoral anterior vestibular incision, the soft tissue pad of the chin was widely released from the tight and scarred attachments to the bone and fixation plate. The central fixation plate and seven screws. In harvesting the buccal fat pads for the intepositional graft, it was discovered little buccal fat remained. Thus it became necessary to use an implant for the interpositional layer. A 2mm thick ePTFE block as fashioned to fit into the defect. Multiple 4mms holes were placed through it with a dermal punch and the implant was secured to the chin using two screws that were removed into screw holes that already existed. Prior to mentalis muscle and mucosal closure antibiotic powder was placed into all of the ePTFE implant holes.

The bony step off of the sliding genioplasty is a natural result of the procedure. It usually does not cause any problems but the unnatural shape of the bone can serve as an area for soft tissue collapse and scar contracture. This may become magnified in the more extensive t-shaped bony genioplasty used in v-line surgery. Its treatment is to release the scar contracture and place an interposition material (graft or implant) to prevent its recurrence. A solid fat graft is always a good choice to use in any release of scar contracture. But when a fat graft is not available an implant can be used with precautions to prevent infection.

1) Tightness of the chin can occur after a sliding genioplasty to v-line surgery.

2) Scar contracture can occur into the bony step off of a sliding genioplasty due to the alteration of the natural convexity of the chin bone.

3) Release of such contracture must be accompanied by some form of interpositional graft or implant to prevent recurrence of the symptoms.