Background:  Any form of skull augmentation must consider the stretch of the scalp to accommodate it. The scalp is a naturally tight soft tissue covering as it is stretched over a large hard convex surface and there is no functional purpose in it being loose. Once elevated from its bony attachments across the top of the head, some laxity of the scalp does occur but there are limits. The five layers of the scalp give it a dense structure which is much more resistant to stretching than if it was a thinner skin only construct.

The consideration of how much the scalp will stretch has great relevance in the placement of custom skull implants. Such aesthetic implants are unique due to their potentially large surface area of coverage and the ability to place them through small scalp incisions. Beyond getting them placed through the incision, one wants to be able to get the incision closed…and preferably without undue tension. The most valuable preoperative design feature of custom skull implants that I use to judge what is safe t place is its volume. For most patients one should stay with an implant volume that is not greater than 125cc to 150ccs.

When the aesthetic requirement of a custom skull implant is larger, a first stage scalp expansion is needed. This is understandably not appealing to some patients and they may elect to go with a smaller implant size that will safely fit. They can then come back later to have a larger skull implant placed as the first implant has had a tissue expander effect. This is what I call a delayed two stage skull augmentation procedure. In some cases this is deliberate but most of the time it is unintentional. They thought they would be satisfied with a smaller implant but eventually decide they weren’t. I have learned that one can get an increased volume of 50% to 100% greater with the second skull implant. But what if one wanted to get a third skull implant, how much more volume could be added? 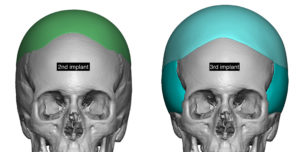 Case Study: This middle-aged female had a prior history of two custom skull implants for enlargement of the crown of her head. Her initial implant had 125cc volume. Once year later she had a larger skull implant placed which had 240cc volume, an increase of 92%. She came back two years later for a third and larger skull implant. In designing the third implant a slight increase in its surface area coverage was done and the crown height was increased by another 5mms. This resulted in a new implant volume of 344ccs, an increase of 43%. Because of the additional height of the crown, posterior temporal or head widening implants were also added to keep the head shape proportionate. These implants added an additional 25cc of volume to each side of the head. 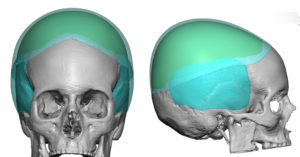 A direct overlay comparison showed what the new 3rd implant added in dimensions beyond what the second implant provided. 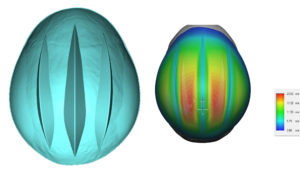 Knowing that the increase is size and volume would make placing the implant very difficult (or impossible) through the existing scalp scar/incision, three anteroposterior wedges were designed into the implant to allow it to be folded more easily for insertion. In the design this makes it look like the implant creates ‘horns’ or ‘spikes’ on the patient’s head. When in reality this is the implant volume removed to create the internal wedges. 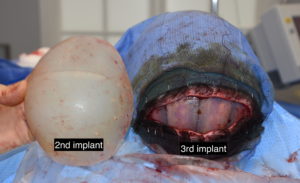 Under general anesthesia her existing scalp incisions was opened and the indwelling implant removed. Capsulotomies were done around the implant pocket perimeter. The new custom implant had 50 perfusion holes placed into it using a 5mm dermal punch. It was rolled and then inserted. Once positioned the scalp was able to closer over it but it was tight.

The posterior temporal implants were placed through incisions behind the ear in the submuscular pocket location. 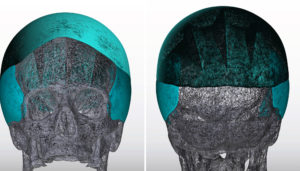 To no surprise the scalp becomes less able to be stretched with increasing volumes added underneath it. While a near 100% volume increase was possible from the 1st to 2nd implant, that dropped down to less than 50% with the third implant.

2) The placement of anteroposterior wedges in large custom skull implant designs enable it to be rolled for insertion without increasing scalp incisional length.

3) Once the top of the head becomes enlarged sufficiently, consideration needs to be given to head widening as well to maintain head shape proportions.