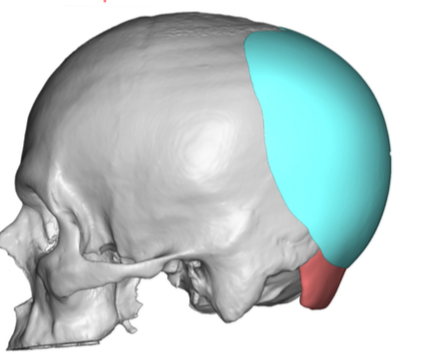 Background: Augmentation of a deficient of flat back of the head is one of the most common skull reshaping requests. Most likely this area of the skull experiences the greatest deformational forces between lying in the womb as a fetus and in sleeping positions in infancy and childhood. There are also certain ethnic groups that are more prone to diminished occipital skull projections.

When designing custom skull implants for back of the head augmentation, the first observation is how high the lower end of the visible occipital bone is. While a significant portion of the occipital bone extends down to the spinal cord this portion of the occipital bone curves inward and is buried under the thick neck muscles, thus having no contribution to the shape of the back of the head. The lower end of the skull bone on the back of head stops at the nuchal ridge which is roughly at about the same level as the brow bone on the forehead. (it is actually lower but not by much) So it becomes important to establish what the patient’s shape goals are for the neck of the head to be sure they are attainable and not too low given where the bone actually is. The is done pre implant design by computer imaging.

In some cases in an effort to get the shape of the back of head augmentation as low as possible based in the desired point of maximal projection it may be necessary to have the implant design go a but off of the bone and onto the muscle. This is an interesting implant concept as it has the potential for the implant to impinge on the muscle in significant backward head extension. 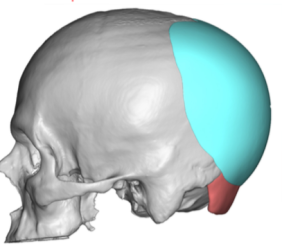 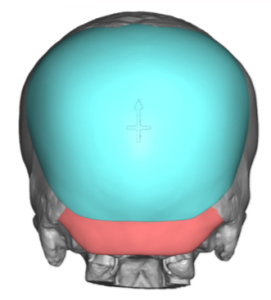 Case Study: This male desired to have his back of head augmented. It was not overly flat compared to other flat back of the head patients but some addition augmentation and shape is what he desired. A custom skull implant was designed that had maximum 12mm projection at the junction of the sagittal and lambdoidal sutures. (120cc volume) In placing the max projection at this point to keep a good shape it was necessary to extend the implant below the bony nuchal ridge and onto the fascia of the upper neck muscles. (splenius capitus/trapezius muscles) To prevent the potential of postoperative implant impingement on the muscle and causing discomfort they durometer of the implant was made a bit softer so the bottom edge of the implant could flex also. 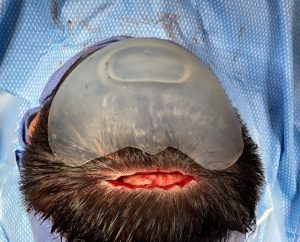 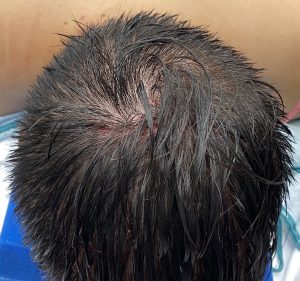 Under general anesthesia and in the prone position a small superior scalp incision was made in the crown area. (patient preference) Dissection was carried down to the nuchal ridge where it was released onto the neck muscle fascia. The implant was inserted, positioned and then screwed to the bone for secure positioning. A drain was then placed and a two layer scalp closure done. 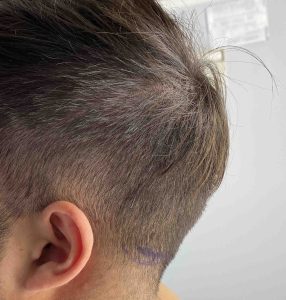 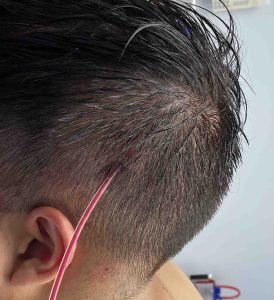 His intraop results showed a back of the head augmentation that was as low as possible.

A basic design principle of custom skull implants for the back of the head is that the convexity of the implant in profile should be equal above and below the point of maximum implant projection. Depending upon where that location f maximum implant projection is will determine how low the bottom edge of the implant needs to go to keep a bit of a rounder shape in profile. If the implant edge is going to go off of the bone and onto the neck muscle it is usually prudent to have the implant made from a slightly softer durometer or stiffness. This will allow this lower edge to have greater flexion and not ‘pinch’ the neck muscle fascia in extreme head extension.

1) Augmenting the back of the head can have a variety of shape considerations, one of which is how low does it need to go.

2) The back of the head skull bone does not go as low as many presume.

3) For a low back of the head skull augmentation the custom skull implant design may need to extend onto the upper neck muscles.