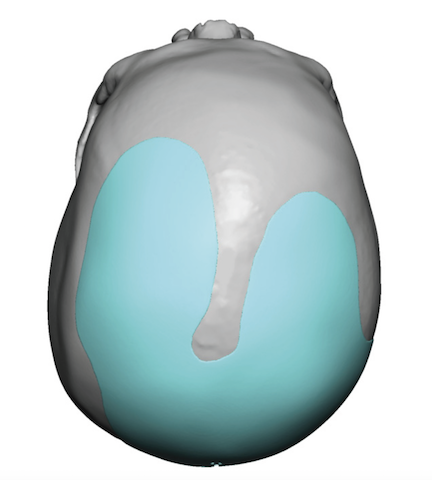 Background: One of the most recognized skull abnormalities is plagiocephaly. This is a term that literally means ‘twisted skull’ or medically known as cranioscoliosis. When viewed from above the head looks lopsided or rotated. This is typically seen as a flatness on one side of the back of the head with an associated forehead protrusion on the same side.

On the opposite side of the head this creates an apparent forehead ‘recession’ and a wider or fuller back of the head opposite the flatter side. When put together all four ‘corners’ of the skull are rotated on their central axis, hence an overall asymmetric skull shape. Plagiocephaly occurs in a wide range of severities but almost always is most significantly seen as a flat area on the back of the head. This is also the most common area in which adult patients seek correction

The treatment for plagiocephaly is most recognized for when it occurs in infants and is treated by helmet therapy. At this early age the skull bones are very malleable and can be reshaped by external pressure. But that opportunity passes quickly and can no longer be done beyond the first year or so after birth.

For the developed skull in adults little is written or known about how to reshape such head shape asymmetries. Surgically removing the bone to reshape it is not an option and the focus must be on what can be done to its external surfaces. This can be done through a variety of bone reduction and augmentation techniques. In so doing careful consideration needs to be given to incision locations as part of the overall aesthetic skull reshaping procedure.

Case Study: This male presented for an overall skull reshaping surgery to comprehensively improve his lopsided head shape. He had a counter clockwise plagiocephaly which is far more common than a clockwise one. 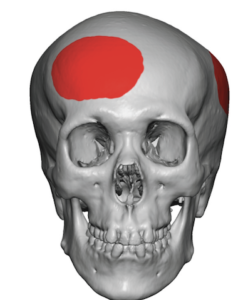 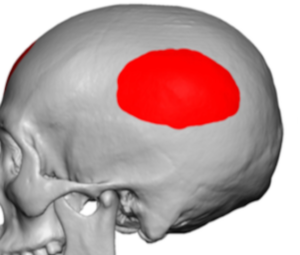 The bony reduction surgical plan was for a right forehead reduction and a combined muscle and bone reduction at the left posterior temporo-parietal area. (highlighted in red) 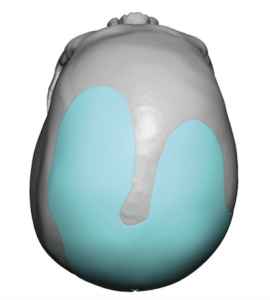 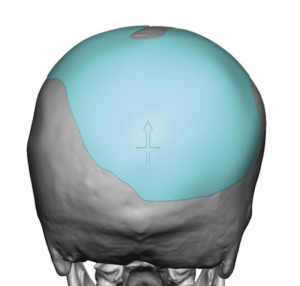 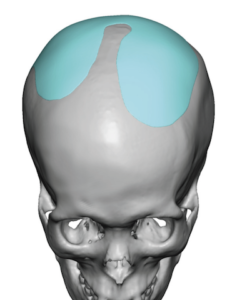 A custom skull implant was designed to augment the deficient right back of the head with extensions up onto the parasagittal areas of the top of the skull to make them more even in height. The total implant volume was 61ccs. 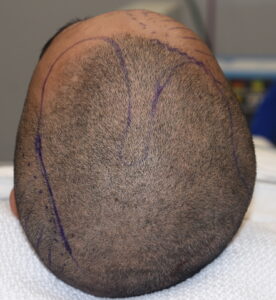 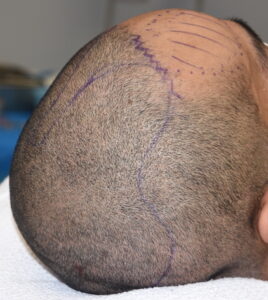 Under general anesthesia and with his permission to shave his head the surgical plan of incisions and outline of the skull implant was marked on his exposed scalp. 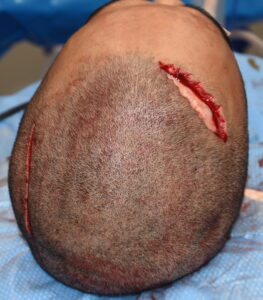 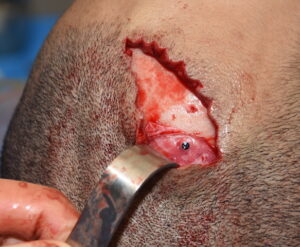 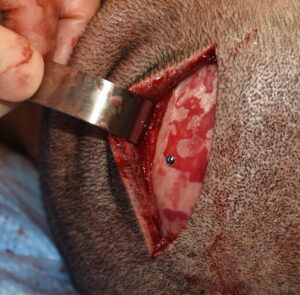 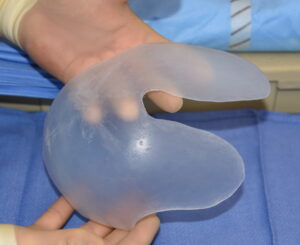 The custom skull implant was inserted through the posterior temporal line incision and positioned. Screw fixation was applied through the two incisions. 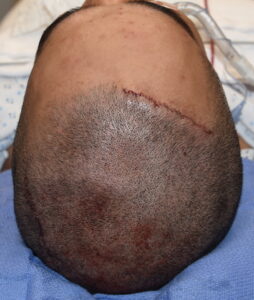 A drain was placed and the scalp incisions closed in two layers. The immediate head shape improvement could be appreciated prior to the application of a head dressing.

Most adults with plagiocephaly usually address the flatter back of the head as their sole ‘correction’. This patient desired a more complete correction and was willing to have the necessary scalp incisions to do so. While the traditional approach to such total skull reshaping would be the use of a bicoronal scalp incision, that is usually an unacceptable scar location and length for most patients. Through these unique scalp incisional locations the desired bone reduction and bone augmentation procedures could be done.

1) The plagiocephalic head shape has a collection of abnormalities from unilateral parieto-occipital flattening, ipsilateral forehead protrusion, and contralateral parieto-temporal widening.

3) In order to perform the different skull reshaping maneuvers the decision of where to place the scalp incisions is an important aesthetic one.