Background: Aesthetic enhancement of the lower jaw, also known as jawline augmentation, can be done by several different methods. For the sake of clarification, jaw augmentation means more than just chin augmentation. It means enlargement of the entire inferolateral border of the mandible from one jaw angle across the chin to the other jaw angle. It is a complete form of changing the entire bony shape of the lower third of the face. Again it is not an isolated change of the front end of the jaw (chin augmentation) or a change to the anterior two-thirds of the lower jaw like a chin wing osteotomy does. (it has no effect on changing the shape of the jaw angles)

Jawline augmentation can be done by using either three standard chin and jaw angle implants or a complete wrap around implant. (custom jawline implant) Either technique has its advantages and disadvantages. Less well known are mixing autologous techniques (various forms of bony genioplasties) with implants to augment the bone behind the osteotomized bone segment. The rationale for this combined autologous-implant approach is two-fold. Some patients may prefer to have as little implant as possible in their face and the sliding genioplasty or chin wing is the only bone moving techniques that can contribute to changing at least a part of the lower jaw shape.

But the most common reason for combining a bony genioplasty and implants for jawline augmentation is to decrease an excessive implant load on the chin. When placing an implant over the chin it is necessary to complete elevate all the soft tissues off of the bone to do so. Once the implant is placed the soft tissues must redraw over them and a hopefully non-tight soft tissue closure done over the implant. Because the soft tissue chin pad is a naturally tighter tissue wrap over a solitary projection point, there are limits as to how much it can stretch over an implant. And when possible, it is always a good idea to not have an overlying tight soft tissue closure in which an implant lies underneath it. A bony genioplasty obviates this concern since the soft tissue remain attached to its inferior surface and will always be carried out and down with it regardless of the amount of bony movement.

Case Study: This male desired to have a jawline augmentation but had a short chin in both the vertical and horizontal dimensions. Computer imaging looked at various changes and the dimensions that the chin needed to change was 8mms forward and 4mms of vertical lengthening. 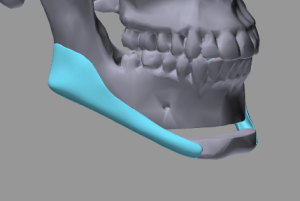 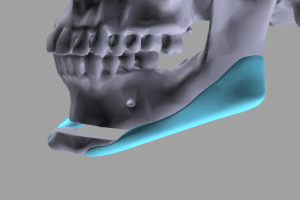 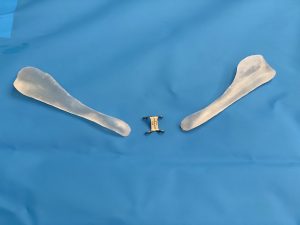 Through a completely intraoral approach the sliding genioplasty was initially performed with a 10mm plate bent downward to create the desired vertical lengthening. The custom extended jaw angle implants were introduced through posterior vestibular incisions, passed under the mental nerve area, and their front ends positioned on the sides of the chin. Screw fixation was used over the jaw angles and chin areas of the implant. The bony gap in the chin was filled with a combination of tissue back bone chips and antibiotic powder. 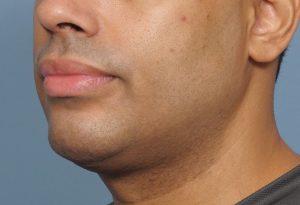 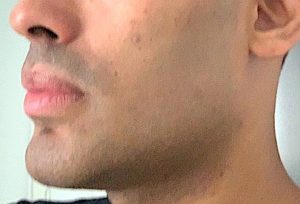 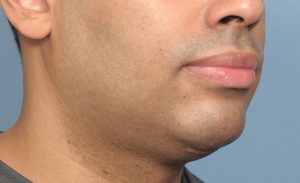 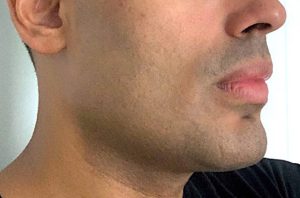 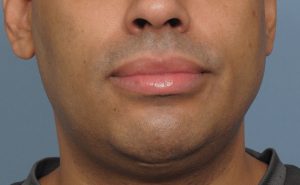 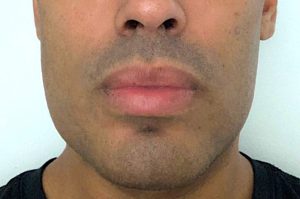 Any time you can create the desired amount of facial bone augmentation and are able to do so without implants, provided the end result is the same, then this is always a good approach to take. The combined sliding genioplasty with custom jawline implant fulfills that goal. It keeps the implants away from where the greatest pressure  on the bone and soft tissues occurs…over the anterior projection of the chin. The chin area tolerates implant pressure well as long as it is not excessive. I have arbitrarily set that at a numerical number of 12mms which is additive horizontal and vertical augmentation. That number may be able to be exceeded IF a standard chin implant has previously been placed.

1) It is best to avoid too much implant pressure on the chin area due to the detached tissues that are needed to perform the procedure. (lower risk of incisional dehiscence and infection)

3) The custom jaw angle implants must cross over the step off defects at the back end of the sliding genioplasty and wrap around the sides of the chin to create a connected and smooth jawline effect.