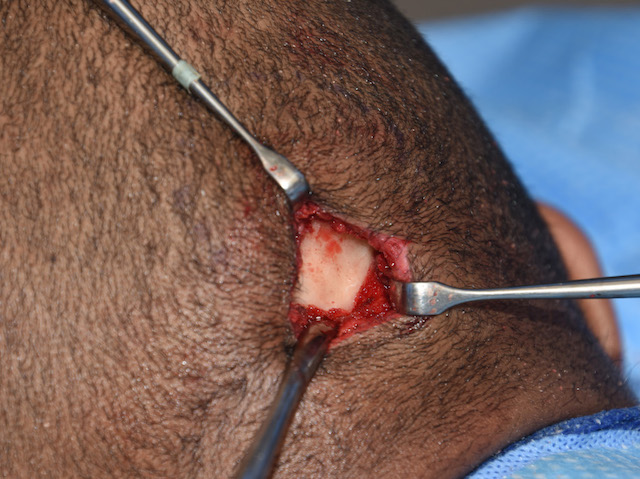 Background: The occipital knob is a common skull reshaping procedure that is exclusively requested by men in my experience. What brings it to the patient’s attention is their hairstyle, with either a very short or shaved head in which all topographic highlights of the skull becomes visible. The central bony projection that appears in the midline of the back of the skull is a very noticeable and aesthetically disruptive feature to what is a largely convex shape to the back of the head.

While the occipital knob appears as a relatively small bony projection it is very much like the tip of an iceberg. Because it projects outward from the turning point of the occipital bone its tip projects posteriorly and is what is seen. The knob sits at the transition between the visible and invisible occipital bone on an otherwise convex surface. 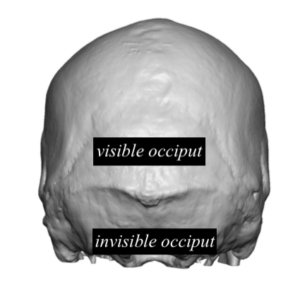 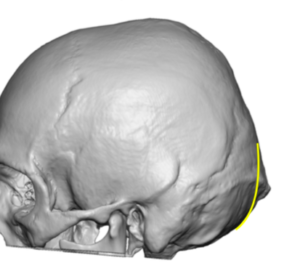 From this anatomic perspective it becomes important in occipital knob reduction that the convex shape of this transition point is restored to get a complete knob reduction. This means carrying the reduction on the knob to its underside beneath the most superficial muscle fibers of the outer neck muscle. (splenius capitus muscle) 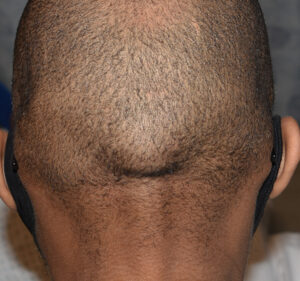 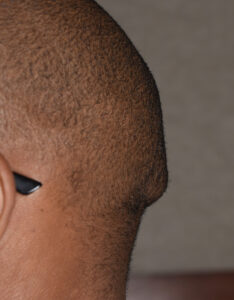 Case Study: This male was bothered by a typically-sized occipital knob projection. Most would estimate that the size of the knob is less than half an inch at most. (10 to 12mms) 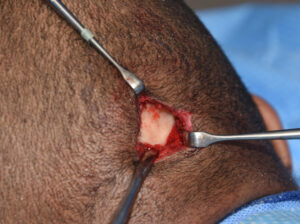 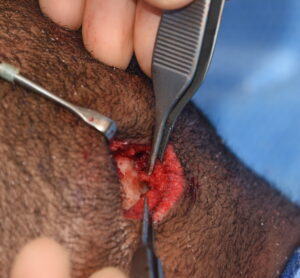 Under general anesthesia and in the prone position a 3cm long horizontal scalp incision was made and the knob fully exposed by circumferential subperiosteal dissection. To get around the bottom of the knob the attached muscle fibers were released and the underside of the knob exposed. A high speed handpick and burr was used to initially create an 18mm midline groove through the knob to establish the depth of reduction needed. Then the two sides were equally reduced making the underside of the reduction curved inward. It is also important during closure to remove some redundant soft tissue which covered the protruding knob. Most of this would be galea and sometimes a little bit of skin. 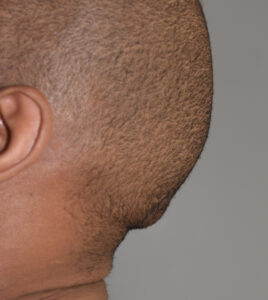 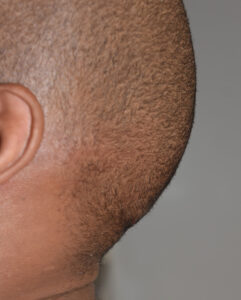 His immediate intraoperative result showed a complete elimination of the bony knob and creation of a smooth convex back of the head shape. 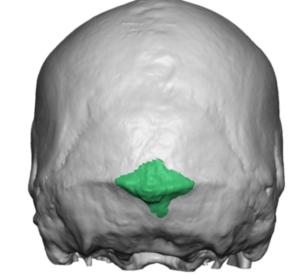 If the occipital knob is just burred down in a straight line fashion, it will be less visible but not completely so. It is necessary to reduce the inferior half of the knob to match the natural inward curve of the skull in the lower visible edge of the occipital bone.

1) The occipital knob skull deformity is much bigger in thickness than it appears externally.

2) Because the occipital knob sits on the bottom end of the visible inferior occipital bone adequate reduction requires a technique that curves inward like the natural shape of the skull.

3) To ensure a convex bone reduction that curves inward superficial fibers of the splenius capitus muscle must be released for adequate bone exposure.