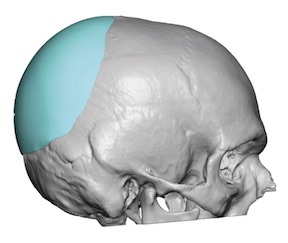 Background: The back of the head is comprised of two main skull bones, the occipital and the parietal bones. Together they are responsible for its overall shape which, like much of the rest of the skull, has a certain amount of convex shape to it. It is not a part of the skull that has many topographic features to it. It is also the least visible part of the skull…at least to the patient.

There are several discernible features of the back of the head that are seen as aesthetically undesirable and are not uncommon. Bony overgrowth of the inion (knob) and nuchal ridges creates a visible protuberance at the bottom of the visible occipital skull. (which is actually the midportion of the bone) This bony overgrowth is seen in men and rarely in women. Another very common back of the head deformity is flatness. This is a lack of combined occipital and parietal projection creating a flat contour between the nuchal line inferiorly and the top edge of the parietal bone. It is equally common on both men and women.

The combination of an occipital knob protrusion inferiorly and a flat skull above it creates an unusual profile shape of the back of the head. This back of head shape is very uncommon but can be treated concurrently for complete reshaping 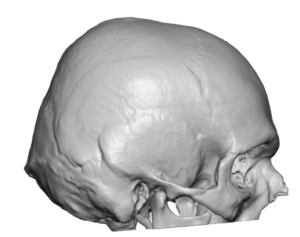 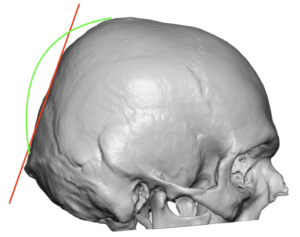 Case Study: This male was bothered by the shape of the back of his head which he wanted changed before he shaves his head due to hair loss. His 3D CT scan in profile showed a combination of an occipital knob protrusion and a slanted forward back of the head. Together this created a straight slanted back of head slope with no curvature. This unaesthetic back of head slope (red line) is compared to the desired back of head shape. (green line) 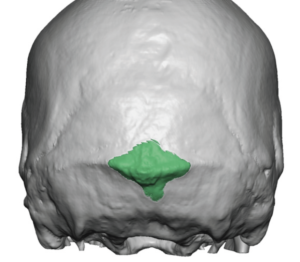 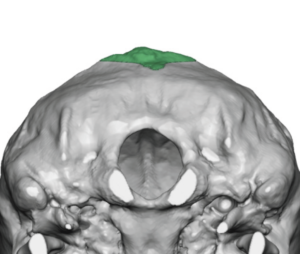 The amount of occipital knob and limited nuchal ridge reduction was determined from the CT scan. (green = bone removal) 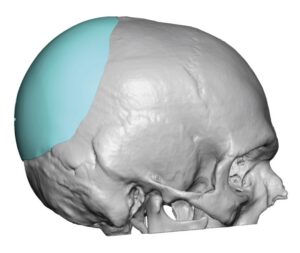 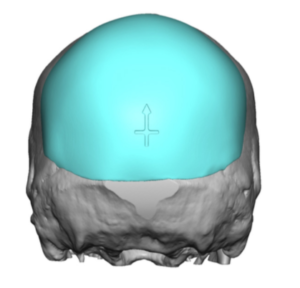 A custom skull implant was then designed to start above the reduction and create the desired convexity to the back of the head with a volume of 105ccs.

Through a 7.5cm horizontal scalp incision that was centered over the knob/nuchal ridge, the combination of occipital knob reduction and the insertion of the custom skull implant was performed. (the patient declined any pictures to be taken or shown of the surgery)

It is likely in this case that the actual occipital knob protrusion was very modest. But its appearance was magnified by the severely forward slope of the back of the head.

1) The back of the head can be affected by a variety of bony deformities, which can occur in multiple combinations.

2) In the presence of an occipital knob with an overlying flat back of the head, restoration of an improved back of the head shape requires a combination of inferior reduction and superior augmentation.

3) A 3D CT scan helps in both the planning of the occipital knob reduction and custom skull implant augmentation.