In excessive projection it is a result of too much occipital bone development or thickness. Reducing the prominent occipital bone by a bone burring technique is done very commonly in my practice and, in the properly selected patient, can be quite successful. (properly selected means using preoperative predictive imaging to be certain such reduction achieves the patient’s desired back of the head profile improvement)  But in some patients their goal is an overall improved roundness to the back of the head with the occipital reduction which usually means adding fullness below the occipital protrusion. 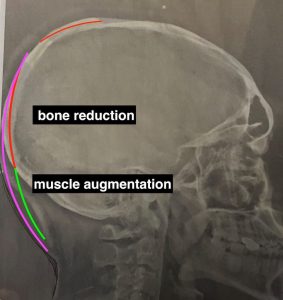 Case Study: This male had a prominent HIGH back of the head protrusion which also involved the top of his head as well. His goal was to reduce the top and neck of his head as well as make it rounder by lowering the bottom edge of the occipital bone. Using his plain side view skull film the operative plan consisted of three component, two reductive (top and neck of head) and one augmentative. (below the nuchal ridge) 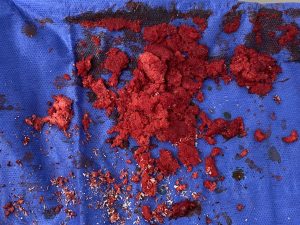 Under general anesthesia and in the prone position the top head was reduced through an existing scar scar (conveniently located over it) and a new small wave incision over the lower occiput. The skull bones were reduced by removing the outer cortex of the skull with a high speed bone burring technique which generated an enormous of bone shavings/debris. 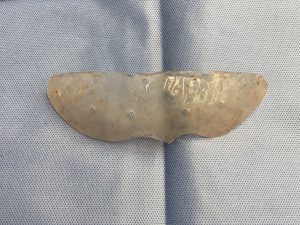 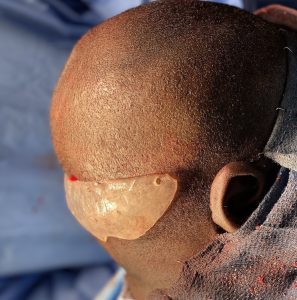 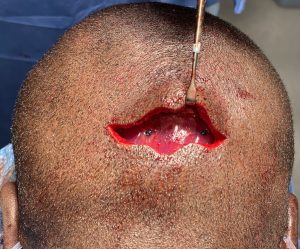 The nuchal ridge skull implant was inserted, positioned, and secured with microscrews to the bone. Closure was done with with two drains placed inferiorly. 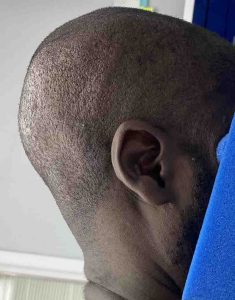 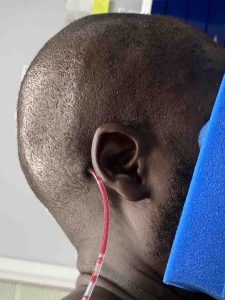 His immediate intraop back of the head reshaping result showed the much rounder shape with the combined high bine reduction and low bone implant augmentation.

The nuchal ridge skull implant provides an innovative approach to rounding out the high back of the head protrusion deformity. While most occipital bone protrusions when reduced produce a good profile shape to the back of the head, the high occipital protrusion head shape may still look out of proportion to the face. This is because the bottom end of the visible occipital bone sits high. Adding volume to the bottom end of the bone makes for a better head shape and complements the bone reduction done above it. This does require some fascial and muscle release along the nuchal ridge so the implant can extend the bottom edge of the visible occipital bone. Between the bone reduction done ‘high’ and the bone augmentation done ‘low’ the objective of a better shape to the back of the head is achieved.

1) The shape of the back of the head in controlled by the skull which sits much higher up than most people realize.

2) A prominent occipital or back of the head protrusion can be reduced some what but is limited by the thickness of the bone.