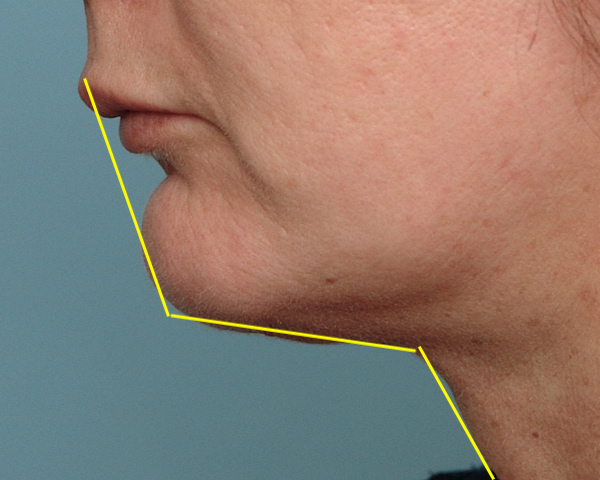 Background: The facial profile consists of several protruding structures that are easily seen and analyzed. Facial profile prominences include the brow bones, nose, lips, chin and neck. (cervicomental angle) Several of these structure have unique relationships to each other and are commonly employed in aesthetic surgery as ‘tandem procedures’. The two most commonly paired facial relationships are the nose-chin and the chin-neck. These relationships lead to tandom aesthetic surgeries as in a reductive rhinoplasty with a chin augmentation and a chin augmentation combined with neck reduction/reshaping. They work in tandem because one of the procedures makes its partner look better and vice versa.

The chin-neck relationship is a bit different than that of the nose-chin because they are directly adjacent. Such proximity makes the anatomy of one directly influence the other. When the chin is recessed or underdeveloped the neck muscles that attach to it are more posteriorly positioned potentially leading to a more indistinct neck angle. This weaker jaw development and more obtuse neck shape has long been recognized from orthognathic surgery to facelifting procedures.

When considering chin augmentation, numerous factors come into consideration including the occlusion, depth of the labiomental fold, the degree of the chin recession, gender and age of the patient. In a younger patient with a significant chin deficiency and malocclusion, orthognathic surgery should at least be considered to treat the root of the problem. Conversely in an older patient with the exact same anatomy, a less invasive camouflage approach is likely to be taken. 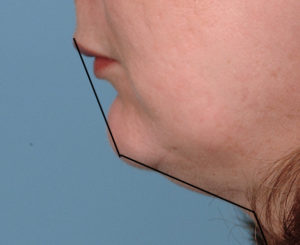 Case Study: This middle-aged female presented for chin augmentation. She had a Class II occlusion with 5mms overjet, a deeper labiomental fold and a moderate neck fullness. She had a low and minimally discernible cervicomental angle. 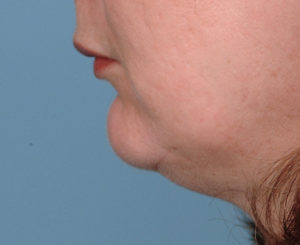 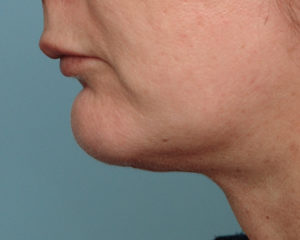 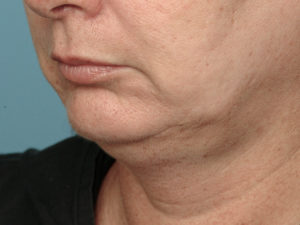 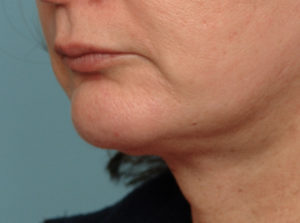 Under general anesthesia and through a 1.5cm submental skin incision. an extended confirm chin implant was placed with 5mms projection. Through the same incision submental and neck liposuction was done with 2.5mm cannula using wall suction. 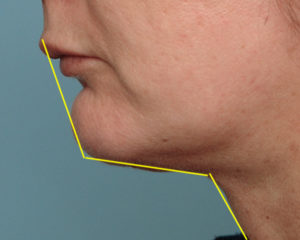 1) A short chin with a fuller neck is a common aesthetic lower facial shape.

2) The diametric movement of chin augmentation and posterior neck reshaping creates a greater effect than either one alone.

3) While the maximal neck reduction should always be done the amount of chin augmentation needs to be considered more carefully.