Background: A common method of aesthetic jaw augmentation in my practice, although not well known at all to many, is combining an osteotomy with implants. In this specific method a bony genioplasty is done for the anterior third of the jaw and custom implants are used for the remaining two-thirds of the jaw behind it. This approach is used when the amount of dimensional changes in the chin are significant due to the limitations of how much the tight soft tissue chin pad can be pulled over an implant.

Unlike the bony genioplasty the rest of the jaw behind it does not have the same soft tissue limitations. Besides the fact that only implants can make changes behind the chin, implants along the jawline particularly in the vertical dimension (lengthening) can be effectively done. Custom implant designs are needed to have the anterior end of the implant blend into the repositioned  chin bone for a complete jawline augmentation.

Case Study: This male has an existing chin implant which did little to improve the shape of his chin. He desired to have a more complete jawline augmentation to improve what was largely a vertical deficiency of the lower third of his face. In these vertical deficiencies it is always greatest  at the chin. Using predictive imaging it was determined that he needed 8mm vertical lengthening and 7mms horizontal lengthening. This was deemed too much in which to use an implant for this degree of chin augmentation change. 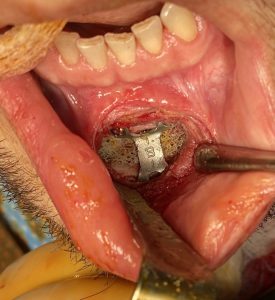 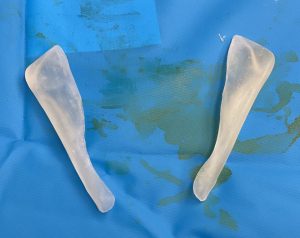 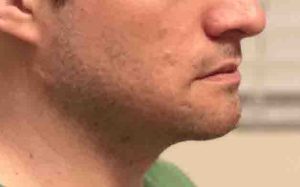 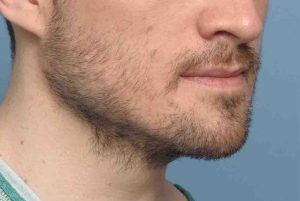 His six month result shows good improvement in his jawline, particularly in the vertical dimension of the chin. 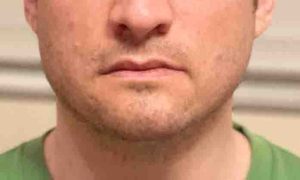 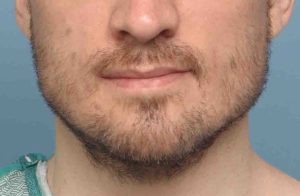 When it comes to using an implant for jaw augmentation the limiting factor is the chin. This is not so evident in the horizontal dimension but becomes a significant factor for vertical lengthening of the chin. As a guideline I use the concept of ’12’ as to what ca be achieved with an implant in the chin. That number refers to the combination of horizontal and vertical dimensional changes. Any number over 12 should be done by a bony genioplasty and will avoid a large implant load on the soft tissue chin pad.

1)With large chin augmentation changes a sliding genioplasty is a more effective and safer approach due to the limitations of the soft tissue chin pad.

2) Augmenting the jawline behind the repositioned chin bone can be done with custom implants to create a smooth jawline.