Background: The flatter midface manifests itself often in the presence of a normal occlusion. This may be because the patient has a history of orthodontics which has normalized the occlusion but this does not change the shape of the bone above the alveolus. But often the midface recession is mild and not the typical degree that is associated with greater panfacial deficiencies.

The midfacial skeleton is composed of various convexities and concavities. Its largest surface area is concave and overlies the maxillary sinuses between the eyes and the nose. But it does have some relative convexities along the infraorbital rims, pyriform aperture and the maxillary alveolus. Augmenting the pyriform rim with extensions out over the canine fossa provides central midface augmentation with lessening of the depth of the nasolabial crease. 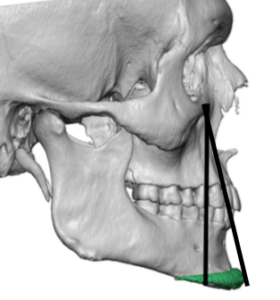 Case Study: This male desired a high cheek bone look as well as to augment his infraorbital hollows. He also wanted to soften the depth of the nasolabial crease by the side of the nose. He had a prior history of chin implant augmentation. His 3D CT scan showed a midface retrusion that is magnified by a chin implant as seen in the retroclined line. 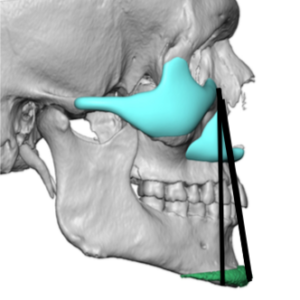 Using his 3D CT scan custom infraorbital-malar and pyriform aperture implants were designed. The infraorbital part of the implant saddled the rim and added 5mms of vertical height. The malar-arch component added only 2mms of projection. The pyriform aperture implant had 5mms of projection by the side of the nose and 3mms at the anterior nasal spine. This provided a decrease in the facial line angle in profile. 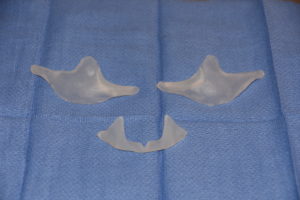 Through combined lower eyelid hemi-lid and intraoral intraoral incisions, the implant were placed and secured with screws.

It is easy to see in this custom facial implant patient that the infraorbital-malar and pyriform aperture implants (often called peremaxilary-paranasal implants) complemented the existing chin implant and improved the facial profile angle. What is not appreciated in just looking at 3D CT scans is the greater influence that occurs at the soft tissue level with increased paranasal-maxillary fullness and lessening of the nasal end of the nasolabial crease.

1) A flatter midface is noted by the lack of projection of its two convex bone surfaces, the infraorbital rims-anterior cheek and the central pyriform aperture boy rim.

3) With a flatter midface profile a chin implant exacerbate its deficiency.