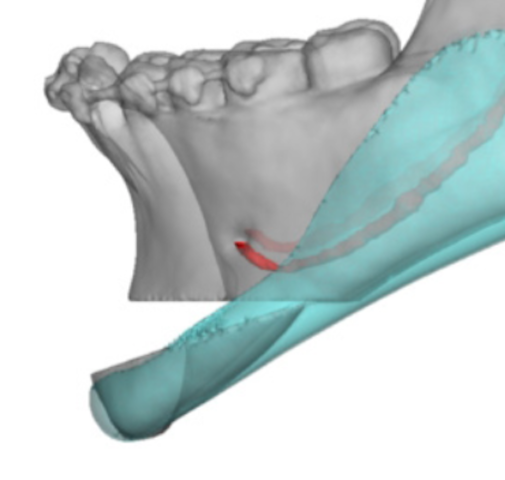 Background: Jawline augmentation with standard implants employs ‘spot’ augmentation at its corners. (chin and jaw angles) Custom implant augmentation, however, covers the entire jawline and, as a result, has a more profound and complete effect on the lower third of the face. Because of its circumferential coverage it provides a true three dimensional change to the jawline.

In considering the design of a custom jawline implant there are seven (7) specific dimensions that need to be considered. There is the horizontal, vertical and width dimensions of the chin and jaw angles as well as how they connect between them. While there are certain restrictions that apply to each of these dimensions when it comes to implant augmentation, the most significant is that of the vertical dimension of the chin.

The naturally tight soft tissue chin pad that wraps around the chin prominence has limitations of stretch that must be considered when using an implant. In my experience the combined horizontal and vertical dimensions of the planned implant augmentation can not exceed the number 12 in most cases. (in some cases that may be increased to 15) But without question when the vertical chin lengthening need is 10mms or more, with almost any amount of horizontal increase, an implant will be problematic and ill-advised. In these cases a vertical lengthening bony genioplasty needs to be done to safely achieve this dimensional change. The only question then is whether it should be done first, followed secondarily by the placement of a custom jawline implant or done at the same time. 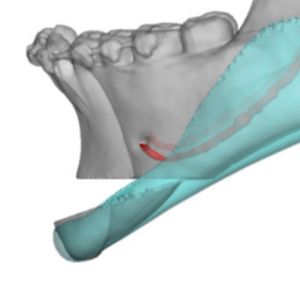 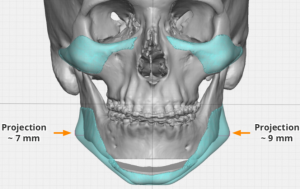 Case Study: This male desired cheek and jawline for a more masculine facial appearance. While he has a smaller jaw it was most noteworthy that his chin look compressed and had a deep labiomental fold. These are clinical signs that there is a significant vertical shortness to the chin. Computer imaging was done to determine what type of change of chin change looked the best and it was determined that a 10mm vertical increase was needed with a 5mm horizontal increase. A custom jawline was designed that incorporated the vertical lengthening bony genioplasty. 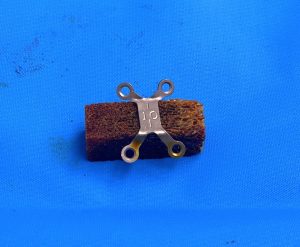 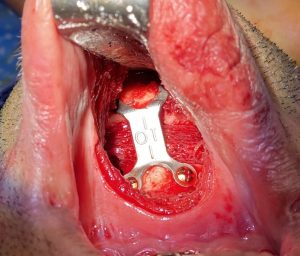 Under general anesthesia and after the custom infraorbital-malar implants were placed, an intraoral approach was used to downfracture the chin 10mms and advance it 5mms with plate and screw fixation with an interpositional allogeneic wedge bone graft. 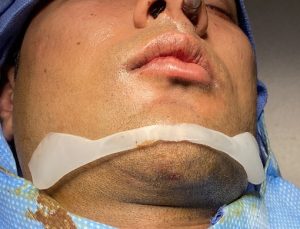 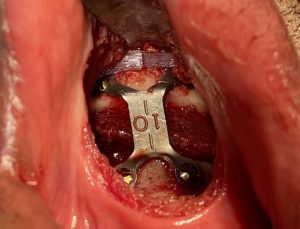 The custom jawline implant was then put into place using a midline split implant technique introducing it through the posterior intraoral incisions. It was then brought together in the midline and secured. Getting it aligned in the midline and making sure it laid as designed back along the jawline to the jaw angles is of paramount importance and is not easy with these limited incisional accesses.. Screw fixation was also applied to the jaw angle portions as well through na percutaneous technique. 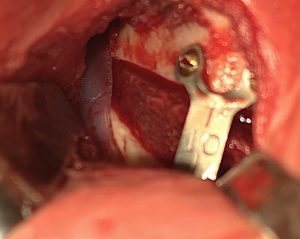 The combination custom jawline implant with a bony genioplasty can be safely combined but is aways technically challenging to get all the moving parts aligned properly. Depending upon what the shape of the chin that is needed, the custom jawline implant can cross completely over the bony chin or can just go up along its sides.

1) When it comes to the tissue expansion capability by implants of the jawline the sot tissue chin pad is the greatest limiting area.

2) When significant vertical lengthening of the chin is needed in total jaw augmentation, combining a lengthening bony genioplasty with a custom jawline implant overlay is the best approach.

3) Getting the custom jawline implant around the sliding genioplasty may require a split implant placement technique.