Background: The sliding genioplasty procedure provides proven dimensional increases in chin projection. It does so by changing the shape of the chin. While it is commonly perceived that the chin bone is cut and moved to a new desired location, the chin bone no longer has its completely natural shape.

Less appreciated is what occurs out laterally at the end of the osteotomy cut. As the chin bone moves forward a separation occurs at the inferior border. In essence another step-off occurs bilaterally whose significance depends on how far the chin is brought forward. The more the chin is brought forward the greater this inverted V notch becomes. This notch may become visible externally which can also create a chin narrowing effect.

Treating these undesired shape changes of the chin after a sliding genioplasty is challenging. If there is also some deficient dimensional needs, a custom chin implant is the preferred treatment method. 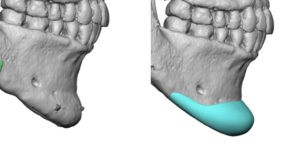 Case Study: This female had a prior sliding genioplasty which was secured with bicortical screws. While it healed uneventfully, she felt that more horizontal augmentation was needed and it  made the chin too narrow along the sides. Using a 3D CT scan a custom chin implant was designed to provide some more horizontal augmentation and fill in the bone defects along the side of the chin.

Under general anesthesia and through a 1 cm submental skin incision, the long extended chin implant was placed with a single midline screw fixation.

A sliding genioplasty is a good operation that provides autologous chin reshaping effects. But it can create some secondary bone ‘defects’ that can be unaesthetic for some patients. Given the topographic complexity that these defects create a custom chin implant, thin as it may need to be, is often the best method of correction.

1) For sliding genioplasty to exert its effects, it must change the shape of the chin bone.

2) Some of the adverse effects of a sliding genioplasty are inadequate augmentation, notching of the inferior border at the end of the osteotomy cuts and loss of chin width.

3) Secondary correction of sliding genioplasty bone defects can be done by a custom chin implant design.