Background:  Aesthetic shape deformities of the upper third of the male face can involve the forehead, brow bone or some combination of both. When it is a forehead issue it can be one of excessive bony prominence (like forehead horns or bossing) or lack of bony projection. (backward sloping forehead or a forehead that is too narrow)

The backward sloping forehead is most commonly seen in men in my experience. It occurs in isolation with good brow bone projection but is also frequently seen when there is brow bone prominences. In male brow bone reduction it is frequently overlooked and assumed to only look so because of the excessive horizontal projection of the brow bones. But computer imaging of the proposed brow bone reduction in profile view before surgery can help the patient determine whether the slope of the forehead above the brow bones is adequate or not.

In male forehead augmentation the biggest challenge is the location and extent of the incision needed to do so. Besides having preoperative control of the forehead shape and dimensions, a custom forehead implant allows for the smallest placement incision to be used to place it. The key in its successful placement is to be able to work with the elastic deformation property of the silicone implant material.

Case Study: This male had a prior history of brow bone reduction through a central pretrichial (hairline) incision. His 3D CT scan showed that this was minimal burring reduction and not a bone flap setback technique. Imaging measurement of his forehead slope was just under 50 degrees. 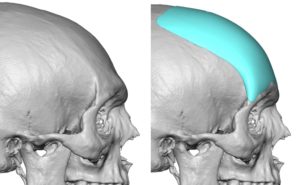 Using his 3D CT scan a forehead implant was designed that started at his brow bone break and carried back behind his hairline almost to the back of his head. This allowed for a natural flow of changing the slope of the forehead into the skull behind it. The width of the implant went just past the temporal lines and came to a blunt edge rather than a feather edge to maintain a more square forehead shape.

Under general anesthesia and using his existing pretrichial hairline incision wide subperiosteal undermining was done between the temporal lines and on top of the deep temporal fascia beyond the temporal lines. The custom forehead implant was rolled for insertion after multiple perfusion holes were placed including those needed to mark the midline for positioning. Two titanium mini screws were used for fixation. 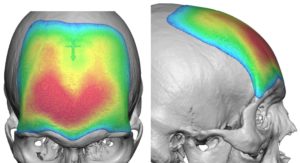 In considering male forehead augmentation thye aesthetic shape of it is more than just changing the slope of the forehead in profile. Considerations must be given to how it looks in the front and oblique views as well. The width of the forehead, how transitions into the temporal area and making it flow smoothly into the rest of the skull are important design issues as well. Only a preoperative design process can allow all of these important design issues to be considered.

1) Forehead augmentation in a male is typified when there is a backward sloping forehead with adequate brow bone projection.

2) A custom forehead implant approach provides the smoothest design with assured feather edging that can be placed through the smallest scalp incision.

3) Most forehead implant designs for correction of a slope must extend further back along the skull than now would think for a confluent and natural appearance.