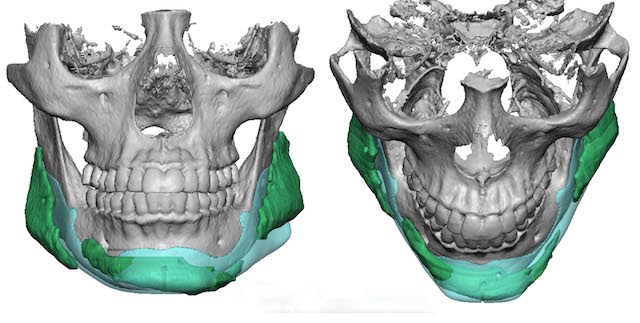 Background:  Male masculinization involves a variety of procedures of which the jawline at the junction of the face and neck is a major skeletal component that contribute to the desired facial effect. Standard chin and jaw angles can be effective for jawline augmentation but pose issues with shape and size as well as connectivity around the jawline. With three implants being placed at once, there are three chances for resultant implant/facial asymmetry.

One of the key benefits of a custom jawline implant is its connectivity. By having a one-piece design, a linear connection is made between the dominant chin and jaw angle prominences. While having a connected design does not ensure that good symmetry will always result between the two sides, as positioning of the implant is always a surgical challenge, but it offers the best opportunity to do so. I have seen far too many standard chin and jaw angle implants that have been asymmetrically placed, so due to surgical technique and others due to inherent bony asymmetry between the bony jaw angles that never had a chance for a symmetrical result from the beginning. 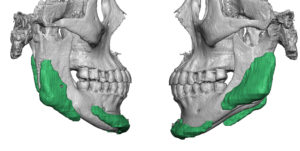 Case Study: This young male had a prior history of standard chin and jaw angle implants for improvement of the lower third of his face. This did not create his desired effect due to both implant asymmetries as  well as implant styles. For his jaw angles he needed more vertical length than width and for his chin he wanted a more square appearance than a round one. Beyond the implant style issues I do to consider his chin and jaw angle poorly placed particularly that of his jaw angle no matter how it appears on the 3D CT scan. With his degree of unrecognized natural bony jaw angle asymmetry, following the bone shape for implant positioning with standard implants was bound to result in visible asymmetry. 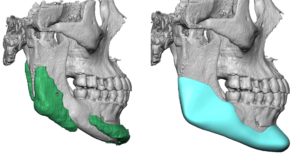 Using his 3D CT scan a one-piece custom jawline implant was designed using the aesthetic outcome from the prior standard implants as a guide. As is certainly true in custom facial implant designing (and perhaps in much of life as well) …’when you know what doesn’t work it is easier to determine what will’. With that concept in mind a custom jawline implant with total vertical jawline lengthening from chin to angles was made with some added width throughout. 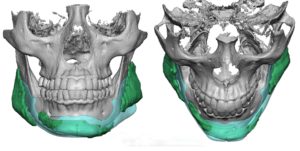 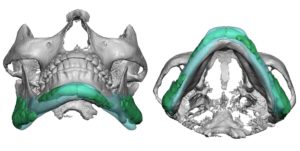 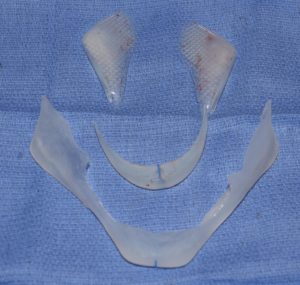 The relevance of jawline cases like this one is two fold. First it is actually quite common for a patient presenting for a custom jawline implant to have indwelling chin and/or jaw angle implants. While many men have very satisfactory aesthetic outcomes from such standard implants some have asymmetry or undesired effects while others simply are ready to ‘graduate’ to an even better result. Secondly, besides the partial pocket formation that is already in place (which technically makes placement harder not easier), the standard implants provide a very helpful guide in choosing the next set of implant dimensions.

1) The most common form of facial male masculinization is a custom jawline implant. In some cases the patient has a prior history of using standard implants to create that effect that have come up short.

2) Standard chin and jaw angle implants may be successfully placed but still not provide the desired aesthetic jawline augmentation result.

3) A custom jawline implant offers the best chance at jawline symmetry due to its connected design…provided that it is sufficiently thick or rigid.