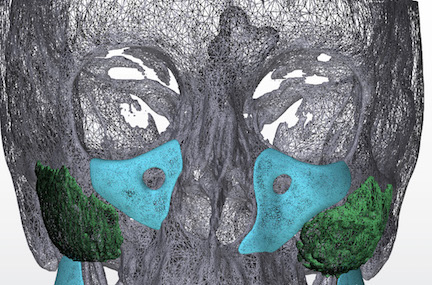 Background: The traditional use of facial implants is based on the most common locations of aesthetic bony augmentation. This constitutes the design of standard implant shapes, most of which provide expansion of existing flat or convex bone contours. Few, if any, standard facial implants provide augmentation to an existing concave bone surface. This is because facial concavities consist largely of soft tissue thicknesses rather than that of bone.

While cheek implants provide augmentation to the curved surface of the zygoma an anterior arch, they can not designed to augment the concave surface of the maxilla or that of the infraorbital rim. Cheek implants can certainly be pressed into service in this area (no pun intended) but such an effect is far from ideal.

Historically non-standard facial areas of augmentation were done by using standard implants in a modified fashion or using implant blocks or sheets cut to shape. While these older techniques may still be occasionally useful, contemporary custom implant design technology can replace all of these older facial techniques for challenging unconventional facial deformities.

Case Study: This middle-aged female had a history of multiple aesthetic facial procedures including rhinoplasty, cheek and chin implants and facelift surgery. She had an underlying facial deformity of linear scleroderma, which had burned itself out years ago, which left her with a left-sided infraorbital-maxillary deficiency. Her cheek implants had camouflaged the left cheek deficiency. Initially a left infraorbital-maxillary implant design was done to being out the bone and soft tissue deficiency. But given her age and an existing tear trough deformity even on the good right side, it was elected to augment both sides of the anterior midface.

Under general anesthesia and through her existing vestibular scars under her upper lip, subperiosteal dissection was done up and around the infraorbital nerves. The capsule of her existing cheek implants was encountered and dissection proceeded underneath them without violating their capsules. A slit was made in the top part of the implants over the open hole so it could be placed around the nerves. Once positioned they were secured with a single screw on each side.

Linear scleroderma creates a variety of soft tissue and bony defects that typically emanate around one of the branches of the trigeminal nerve. Augmenting these type of midface defects is often best done with a custom implant design.

1) Standard cheek implants do not provide augmentation to the more anterior midface.

3) Inserted through an intraoral approach they can be placed under existing cheek implants.