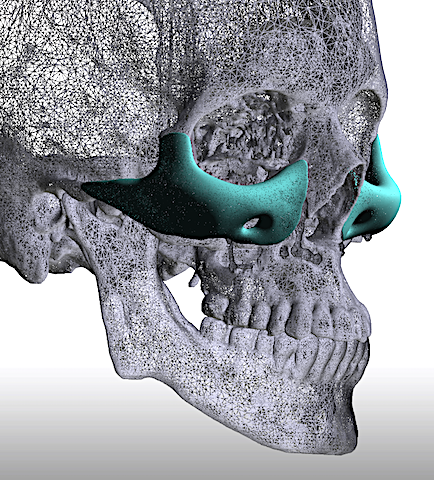 Background:  Midface deficiencies present in a variety of external facial appearances depending upon the extent of the underlying lack of forward bone growth. In the lower midface it can present as a Class III malocclusion. In the upper midface it presents as an infraorbital rim deficiency and a negative orbital vector. More often than not the midface deficiency is more complete and involves the entire midface.

In teens and adults most midface deficiencies are commonly treated for the functional issues that they impose…a malocclusion. A LeFort I osteotomy is a very common and effective surgery that is done for it. But it only treats the lower half of the problem in some patients. While a LeFort III osteotomy creates a more complete midface effect, this facial osteotomy is typically reserved for patients with more severe craniofacial deformities. The extent of the surgery does not usually justify its use in less severe or more aesthetic midface deficiencies.

A more appealing alternative to moving the bone in more moderate upper midface deficiencies is to design and place a custom implant. Since there is no functional benefit to moving the bone in this facial area, a custom implant design allows for a smooth augmentation effect that can blend in with a previous underlying LeFort I osteotomy. This staged alloplastic-autogenous approach results in a modified LeFort III facial advancement effect. 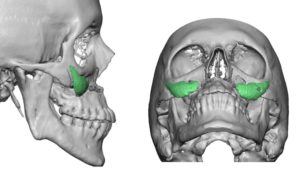 Case Study: This male had a midface deficiency that was previously treated with a LeFort I advancement of 7mms. He remained with a significant midface deficiency  with a significant negative orbital vector. His prior LeFort I osteotomy was combined with submalar cheek implants placed just above the osteotomy line in an effort to extend the augmentation effect. Although not effective it indicated it was recognized that the LeFort I osteotomy did not extend far enough superiorly. 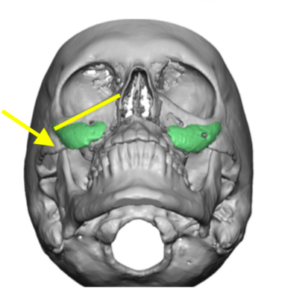 The extent of the negative orbital vector can be appreciated in the submental view with the lateral downtilting of the infraorbital rims and the inward angulation of the zygomatic body. Both of which indicate the extent of the upper midface recession. 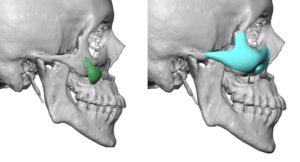 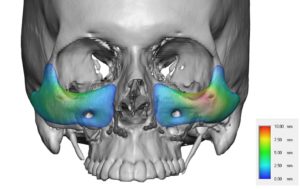 A custom infraorbital-maxillary-malar (IMM) implant was designed to augment the remaining upper midfacial area that was north of the LeFort I osteotomy line. In determining the dimensions of such a custom implant there is no exact science as to how to do it. The footprint of the implant design is fairly straightforward. Dimensions to consider are infraorbital rim height, infraorbital-maxillary projection, malar projection, zygomatic arch length and projection.

Under general anesthesia and through a lower eyelid incisional approach, wide subperiosteal undermining is done. The location of the maxillary hardware can be a useful guide as to the extent of the inferior dissension. The implant is passed through the eyelid incision, positioned and a single 1.6mm screw secures at the anterior zygomatic body. The cheek tissues are resuspended up over the implant and a lateral canthopexy is also performed at closure. 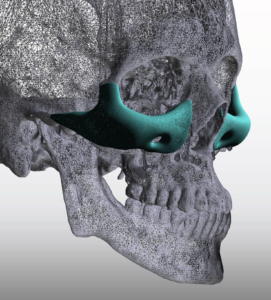 This type of custom facial implant design completes the total midfacial augmentation effect after a LeFort I osteotomy in total midface deficiency patients.. It addresses the negative orbital vector as well as the cheek deficiency. This will also improve the position of the lower eyelid through cheek suspensions and lateral canthopexies. The optimal dimensions of the implant will differ for each patient.

1) In complete midface deficiencies a LeFort I osteotomy only treats the lower half of the problem.

3) The custom IMM implant can be placed through a lower eyelid incision.