Background:  Custom jawline implants (CJI) provide the most effective bone augmentation method for the lower face. But it frequently is not the first jaw augmentation procedure done in some patients. Approximately 40% of CJI patients have a prior history of other more limited procedures. Standard chin and jaw angle implants, sliding genioplasties, chin wing osteotomies, fat injection grafting and injectable fillers all can be found in these patients with have failed to provide the patient’s desired effects.

When considering a CJI in a patient with prior manipulations is whether what was done needs to be removed. In osteotomies plate and screw hardware does not need to be and often serves as a registration in the implant design that aids placement. Any implants will always need to be removed and it would be rare to not be able to do so. Fillers and fat which is in the soft tissues can not usually be removed and usually has a minimal augmentation effect anyway.

One very important utility of these prior jaw augmentation efforts is that they help guide the CJI design. When you know what doesn’t work it is easier to know what can. Using a 3D CT scan almost all implants and all osteotomies can be visualized to understand their dimensional effects. Implants and hardware do not need to be removed to design implants as they can be digitally removed during the design process. 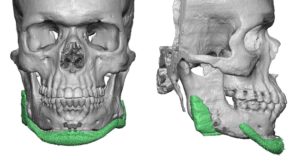 Case Study: This male had a prior history of a sliding genioplasty followed by a square silicone chin implant and Medpor jaw angle implants. Despite these efforts he felt his face had no shape… the chin was still horizontally and vertically short and the jaw angles were indistinct. There was also no visible jawline between the chin and the jaw angles. He had a large face with thick tissues which makes such facial reshaping challenging. The chin implant could the seen in his 3D CT scan with the wings way off the bone…this undoubtably occurred with failure to stay on the bone from the prior sliding genioplasty. Such chin implant wing displacement contributes to his indistinct and wide lower facial shape. 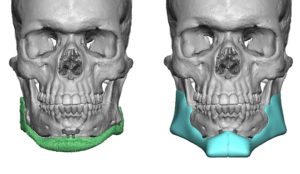 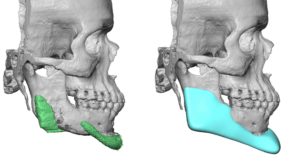 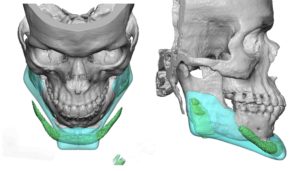 An overlay of the new CJI and the existing implants and chin osteotomy shows the different dimensional effects. In thick tissues it is often important to over exaggerate the CJI design to show a specific external effect. 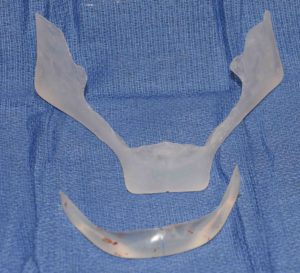 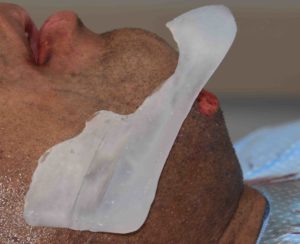 Under general anesthesia his existing submental and intraoral incisions were used for access. The silicone chin implant was easy removed. All capsule and scar on the chin bone, which was tremendously thick, was removed. The Medpor jaw angle implants, however, were completely overgrown with bone and it was eventually decided that their removal was not necessary given their vertical lengthening style. (and would be very traumatic to the tissues) The jaw angle portion of the CJI would simply lay over it for its widening effect. 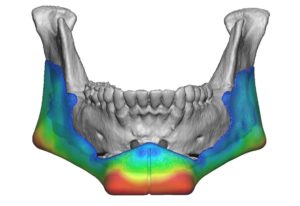 1) Custom jawline implants are often the last stop on a road lined with previous chin and jawline augmentation procedures.

2) Removing all of the capsular scar is important in lacing a custom jawline implant in a chin that has had both a prior sliding genioplasty and chin implant.

3) In some cases Medpor jaw angle implants do not have to be removed and the posterior portion of a custom jawline implant can sit on top of it.