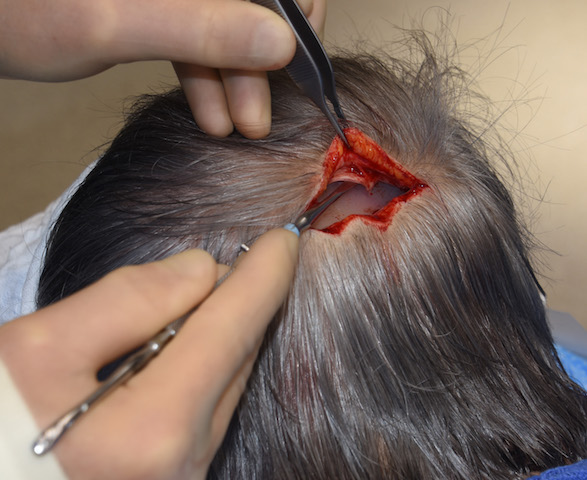 Background: Custom skull implants are a very effective method of increasing various outer contours of the skull. Whether it is for correcting deficient areas of the skull or to increase its external surface for improved shape or size, the use of a 3D CT scan allows preoperative implant designing. In such designs considerable thought goes into the skull surface area to be covered (implant footprint) as well as the various thicknesses of the implant throughout this surface area.

But one limiting factor that skull implant designing can not accurately determine is the scalp’s elasticity. In other words can the scalp stretch enough to accommodate the volume of the implant placed? Unlike almost all other face and body areas which can be implanted, the scalp is uniquely tighter and it is already stretched out over a ‘beach ball’ so to speak. As a result an unlimited amount of skull implant volume can not be placed.

In some skull implant patients, they may decide later that more augmentation is desired. This may be because there were understandably conservative in the size of the original implant design or they have later realized that even more would be better. (an aesthetic phenomenon known as ‘accommodation’) In these cases questions arise as to whether a larger implant can be placed, if so how much more, can it be placed through the exact same incision and what does it look like on the inside.

Case Study:  This 65 year-old male had a custom skull implant placed for a right occipital plagiocephaly six months previously. It was designed to make the right back of the head match that of the left side. It was successfully placed and he went on to heal uneventfully with a much improved symmetry of the back of the head. Having had good success the first time encouraged him to go for a bigger implant that provided an increase in central occipital projection as well. 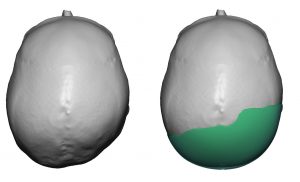 Using his original skull implant design a volumetric increase was done in a new design from 95cc to 156cc. An increase in its perimeter was done on the left side and the central projection increased.

Under general anesthesia, his original scalp incision could barely be found having healed so well. On reopening it the exposed implant showed considerable tissue ingrowth through its perfusion holes. But this did not impede its removal as each spot of tissue ingrowth could be easily separated…although there were 45 of them.

The new thicker implant, to be inserted through the same incision, had to have modifications to its inner surface. Three partial-thickness wedge removals of material were needed so the implant could be rolled into a tight shape for insertion through an incision initially made for a smaller implant. Once inside the scalp the implant unfolded and could be positioned and secured.

This case of secondary custom skull implant placement illustrates how well scalp incisions from skull implants can heal and that complete tissue ingrowth occurs through hoes placed through the implant. (perfusion holes) While either the original incision has to be increased or the implant modified for insertion through the original incision’s length, but a 50% increase in new implant size can be accommodated due to the tissue expanding effects of the first implant.

1) Replacement of a custom skull implant for a larger one can be secondarily done and a safe volume increase is 50%.

2) Secondary skull implant surgery allows an inspection of how the scalp scar heals and whether tissue ingrowth truly occurs in the original perfusion holes.

3) To get a larger custom skull implant in through the original incisional length, internal material wedges permit folding of the thicker implant for insertion.