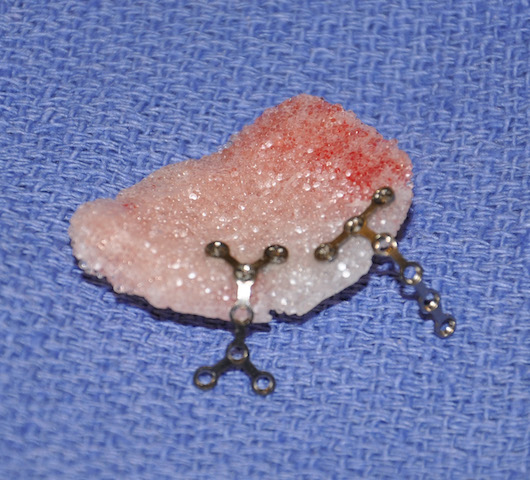 Background: Vertical orbital dystopia is when the position of the eye on one side is lower than the other side. This most commonly occurs on a congenital basis as part of a developmental facial asymmetry. In these cases the entire side of the face may be affected where it is vertically shorter as measured between the eyebrows and the lower jawline. The orbital box (bones around the eye) is lower which also makes the brow bones and eyebrows lower as well. When treating congenital vertical orbital dystopia considerations must be given to the composite anatomy of the surrounding bone and overlying soft tissues as raising the globe (eyeball) alone through isolated orbital floor augmentation may just bury it into the lower overlying soft tissues.

Non-congenital vertical orbital dystopia can also occur from either traumatic or oncologic causes. What separates these types of lower eye positions is that they were once normal. So the eye may have dropped down due to loss of orbital floor support from fracture or resection but the remainder of the orbital bones and overlying soft tissues are already in a symmetric position to the other orbital side. This makes focusing surgery on mainly rebuilding the orbital floor and possibly that of lower eyelid adjustment as well.

Rebuilding the orbital floor can be done using either a graft or implant techniques. The size of orbital floor defects that cause vertical dystopia are usually significant and involve much of the anterior orbital floor. Bone grafts are a good option in which either rib or split-thickness cranial bone grafts can be used. Their disadvantage is of the need for harvesting. Cartilage grafting offers no advantage over bone grafting and enough cartilage would almost always mean a rib graft. Synthetic materials can also be effective and a wide variety of them exist. When using any synthetic material for orbital floor reconstruction it is prudent to be aware that, by definition, whatever is used will have direct exposure to the maxillary sinus.

Case Study: This older male presented with vertical orbital dystopia as a direct result of an oncologic resection of a tumor (no post surgery radiation) resulting in loss of the associated eye. This had been replaced with a prosthetic eye but it sits significantly lower than the other side as there remains an absent orbital floor as can be seen in his 3D model. From this 3D model a custom orbital floor implant was made from HTR porous polymer material.

Through a subciliary lower eyelid incision the orbital rim and what as left from the orbital floor was elevated. Dissection was carried across scar tissue which had filled the maxillary sinus cavity to the medial bony edge of the floor. The custom orbital floor implant was placed and scored into position onto the bony orbital rim using microplates and screws that were preplaced onto the implant. 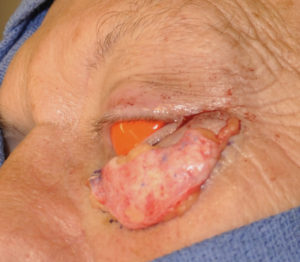 His after surgery results showed more symmetric realignment of his horizontal pupillary levels.

The missing orbital floor can be built up by a variety of implant materials. But no matter how it is built up there is an underlying maxillary sinus….which is an air-filled cavity. Thus there is an ever present risk of infection although the long time use of orbital floor implants of a wide variety of materials shows a very low infection risk. This patient had an obliterated maxillary sinus which was filled with scar so there was no communication with air.

1) Vertical orbital dystopia can occur as a result of oncologic resections with loss of the orbital floor.

2) A custom orbital floor implant replacement can be made from a 3D CT scan using the opposite side for the design.

3) Because the orbital floor communicates with the maxillary sinus the use of an alloplastic material for the 3D reconstruction has a high risk of infection.