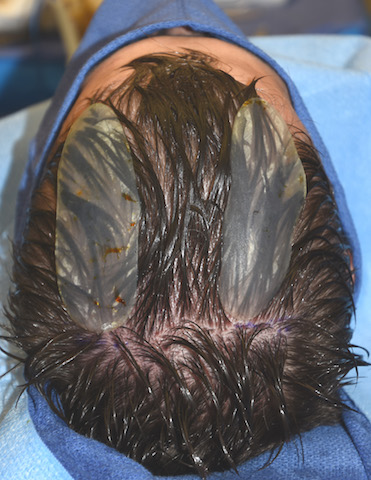 Background:  Despite its anatomic makeup of multiple bones, the shape of the skull is largely smooth with a convex contour over the its bony areas and minimal convexity or flatness at the sides. From an aesthetic standpoint the head or skull shape is viewed as five distinct units; forehead, top of head, back of head and the two sides of the head. Shape abnormalities may occur in any one of the regions or involve multiple regions concurrently. Such abnormalities may be excessive height or projection or concavities/depressions. But always the abnormality affects having a smooth surface with a symmetric shape.

Areas of skull flatness or depressions can be visible particularly in the individual who has short hair or a shaved head. While such depressions can occur anywhere on the skull surface a common area is that of the parasagittal region. As the name suggests this lies next to the midline sagittal suture line and extends out to the bony temporal line. It may exist as a depression between the two and extend beyond the bony temporal line into the upper temporal region. Parasagittal deficiencies can be erroneously interpreted as a high sagittal ridge skull deformity in many cases. And combinations exist in severe head shape abnormalities where it is both a combination of parasagittal depressions combined with a high sagittal ridge.

Isolated parasagittal skull deficiencies occur when the midline sagittal and lateral bony temporal lines have normal heights. As a result a discrete depression exists between them creating small indentations. Linear augmentations of them must be done to create an improved convex shape from the frontal view of the head.

Case Study: This male had discrete parasagittal skull depressions from behind his frontal hairline running across the top of his head. To augment them custom parasagittal skull implants were designed with the left side being larger than that of the right in terms of surface area based on how the seen differences between the two sides. (Only computer software could perceive such differences.) 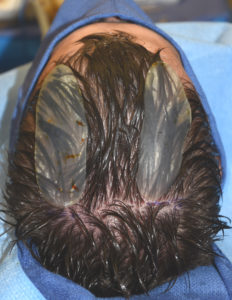 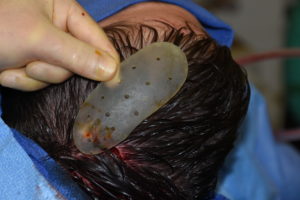 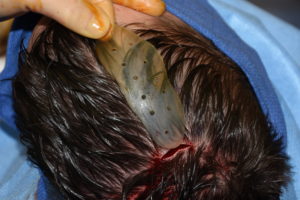 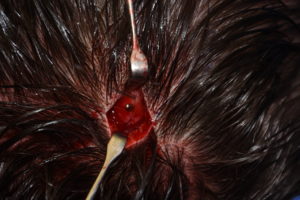 Under general anesthesia, small1 cm scalp incisions were made bilaterally at the posterior end of the parasagittal depressions. The implants were prepared for insertion by the placement of multiple perfusion holes made in them. The implants were inserted  and stabilized with a single 1.6mm screw at the incision location, all done in a one hour surgery. 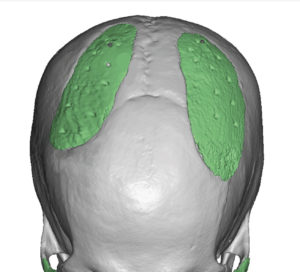 He went on to heal and have  satisfactory outcome. When seen years later for other custom facial implants, the 3D CT scan showed the placement of the implant and the location the screws and perfusion holes. No bony overgrowth was seen.

Isolated parasagittal skull depressions are discrete linear indentations that can be satisfactorily augmented in a short surgery with custom designed implants.

1) Discrete skull deformities are often areas of concavities or depressions that detract from making a rounder head shape.

2) Parasagittal skull depressions can occur between the midline sagittal ridge and the temporal bony line on the top of the head and may appear on just one side or both sides.