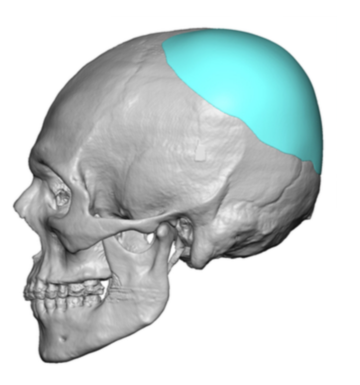 Background: The skull is prone to a wide variety of aesthetic shape deformities that are readily visible in the contemporary short hair or shaved head male. While many of these shape issues are random some do fall into general categories that have a very specific developmental cause. As a result I often see them with some regularity due to their consistent occurrence.

One such common skull shape deficiency is the posterior fontanelle indentation. The posterior fontanelle is the well known soft spot on the back a baby’s head that is larger and closes later than the soft spot on the front. In some cases while the posterior soft spot closes, it does not develop a bone thickness like that of the surrounding skull. While this poses no medically harmful effects, it can cause variable amounts of indentation or crater-like deformities at the top of the back of the head. (crown area) 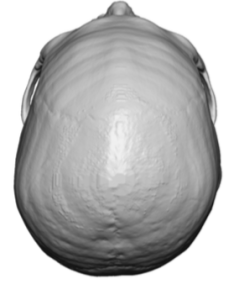 In some cases there is a very discrete and localized indentation about the size of a thumbprint. In other cases the indentation is more widespread causing an overall flattening of the back of the heads with the deepest part in the center of the original posterior fontanelle. While these indentations are often symmetric in shape sometimes they are asymmetric being greater on one side of the midline than the other. The sagittal suture is often seen to be running down through the middle of the indentation and the overlying scalp tissues are quite adherent to the suture,

In improving the shape of the posterior fontanelle skull deformity the treatment options depends on the diameter of the surface area of the deformity. If it is relatively small (5cms or less) then direct application of a bone cement will suffice. But larger surface area augmentations require a custom skull implant to achieve a satisfactory reshaping effect. 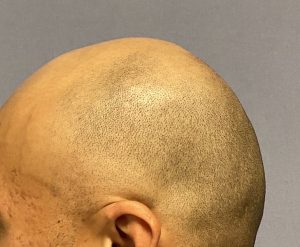 Case Study: This shaved head male was bothered by an overall flattening on the upper back of his head. A 3D CT scan showed a central indentation on the upper back of head with the sagittal suture running through it but above the midline junction of the lambdoidal sutures. The correlation between what was externally visible on his head and the CT scan was apparent. 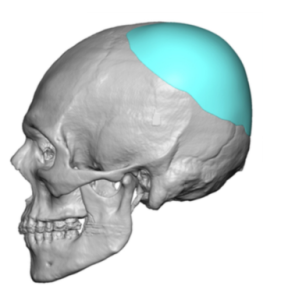 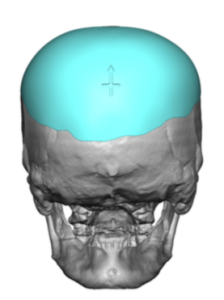 A custom skull implant was designed to build out the upper back of his head with an implant volume of just under 110ccs. As often occurs in these deformities it is important to bring the upper end of the implant up onto the top of the head sparing the higher midline sagittal suture to get an overall smooth rounded effect. 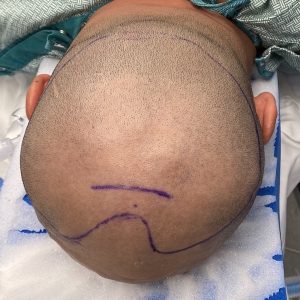 When placing such a custom skull implant the incision can be high or low. Either way the surgery is still done in the prone position. I have done many through either incisional approach and each point of access can work. I leave it up to the patient to choose. Many opt for the higher incision which can be placed at various levels in the crown area. 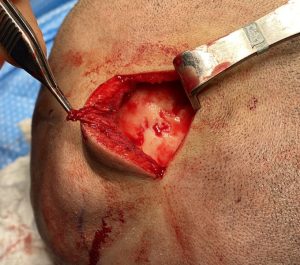 Under general anesthesia the scalp incision was made and the tissues released from the depth of the indentation as well as widely around the marked outline of the implant on the scalp. The central posterior fontanelle skull depression could be seen with the sagittal suture line running through it. 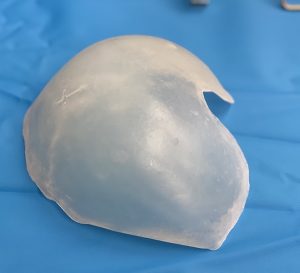 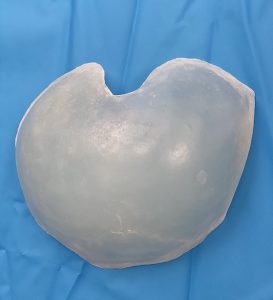 The custom skull implant was prepared by placing multiple 4mm perfusion holes through it. 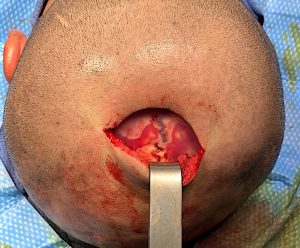 The skull implant was rolled and passed through the incision, unrolled and then positioned per the design file. Careful attention was paid to making sure all of the thinner anterior edges of the implant were unrolled. It was then secured with two small microscrews on the each sagittal side of the implant.

There are multiple flattening effects that occur on the back of head fora varsity of reasons. But a central indentation/depression located above the junction of the sagittal and lambdoidal sutures  indicates a bone thickness issues over the original infant posterior fontanelle site. A custom skull implant that adequately covers the extent of the flattening effect at the crown head area provides the most effective shape correction that looks natural due to the surface area of the implant design.

2) Like a crater the posterior fontanelle indentation affects more than the residual fontanelle site but causes a general flattening of the overall upper back of the head.

3) A custom skull implant placed through a superior incision provides the best release of the adherent tissues and reshaping of the upper back of the head.