Background: The shape of the skull is affected by many factors from in utero development to after birth external molding influences. This can result in non-smooth surfaces and irregular convex skull contours. While most people have an intimate knowledge about the shape of their skull, usually by feel, when it becomes exposed as can occur in some men with lack/loss of hair coverage it becomes more visible to all.

Skull irregularities can be the result of high or low surface contour issues. In my experience skull contours issues are equally split between specific high areas (e.g., sagittal crest, occipital knob) as well as specific lower/flat areas. (e.g. occipital plagiocephaly, sloped forehead) But surface shape issues that do not correspond to suture lines or specific skull bones are very uncommon. 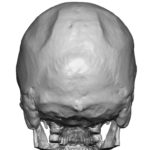 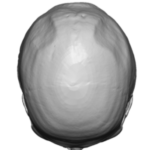 Case Study: This older male presented for correction of a bilateral skull indentations that ran longitudinally through the parietal bones at the junction of the top and back of the head. They were perfectly symmetric. He had to no history of trauma either at or after birth. He had long worn a hairpiece but had recently decided to go without it. A 3D CT scan showed the paired symmetric indentations at the back of his head. 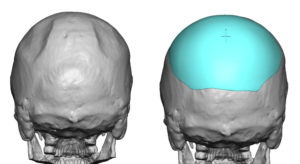 Using the 3D CT scan a one piece skull implant was designed to cover both defects over a broader area. Keeping it connected was a more assured method of having a smoother skull surface than trying to make two independent pieces and placed them accurately.

Under general anesthesia and in the supine position, an 8 cm long scalp incision as made at the junction of his occipital hairline. The implant was inserted and secured with two titanium microscrews. 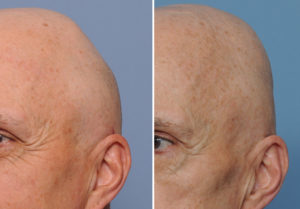 At four years after the surgery his skull indentations have been eliminated. He had a smooth skull contour over and around the irregular bony areas. His scalp incision was nearly imperceptible.

Camouflaging bony skull irregularities often require covering surface areas well beyond where the actual defects are. With the goal of an overall smoother scalp appearance and to prevent the risk of visible or palpable implant edges that can come from trying to ‘patch’ individual defects, larger implant designs may be needed.

1) Skull indentations can occur for different reasons but when they occur in a  bilateral and symmetric fashion they are congenital in origin.

2) To get an accurate fit through a small scalp incision bilateral skull indentations should be treated by a single implant that covers a brow surface area.