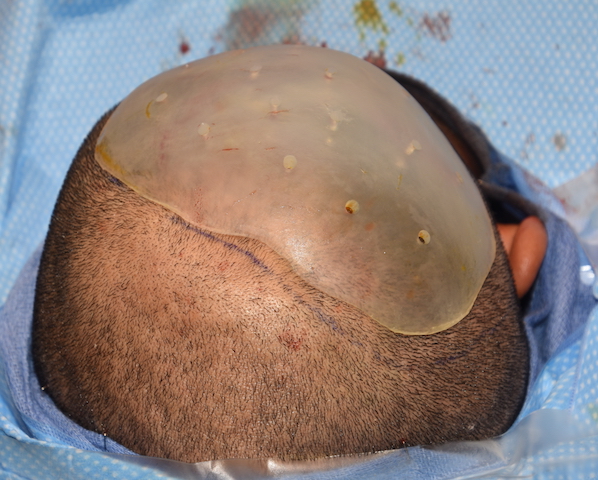 Background: Occipital plagiocephaly is the flattening that is seen on the back of one side of the head. It occurs more frequently on the right side of the back of the head than the left for reasons unknown in my experience. Since it is part of an overall cranioscoliosis the flattening effect can extend much more anteriorly onto the posterior temporal muscle region than one would think.

The superior method for building out the flat back of the head is a custom implant design made from the patient’s 3D CT scan. The computer software can show what is missing on the flattened side by mirroring the bony contour of the opposite good side of the back of the head. This certainly seems logical and will certainly provide a substantial improvement…but never exact symmetry.

It is important in a custom implant design for skull asymmetry that the soft tissue component is also considered. If the bone is flat by definition the overlying scalp will also be a bit thinner. How much thinner is not precisely known but adding some additional thickness to the outer contour of the implant is usually needed. I have yet to see an occipital plagiocephaly patient where the flat side ended too big or had a greater convexity than the opposite side. 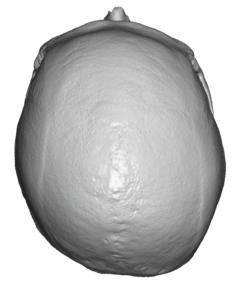 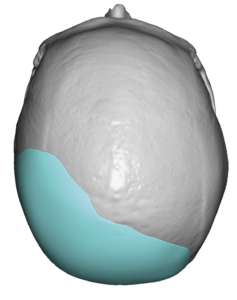 Case Study: This male had an occipital plagiocephaly which was left-side based and was particularly noticeable since he shaved his head. A 3D CT scan was used to design a custom skull implant that matched the opposite more pleasing right side of the back of his head. The implant volume was 70ccs. 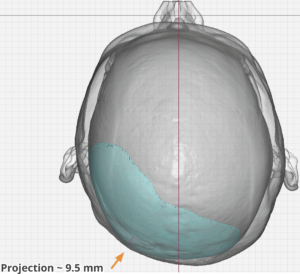 In designing the implant it can be seen that the thickness of the soft tissue was slightly less than the rounder right side. As a result an additional 1mm of implant thickness was factored into its design. It is also relevant to note how far forward the implant design comes…basically to the more forward position of the ear. 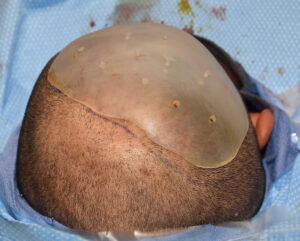 Under general anesthesia and in the prone position a small scalp incision was used to create the large subperiosteal pocket in which the the custom skull implant was placed. To create the most optimal symmetry the implant was shifted over more to the left side based on the midline compass marker. 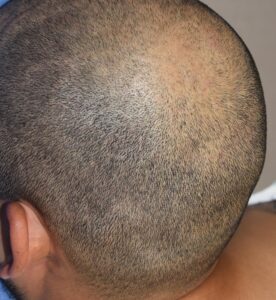 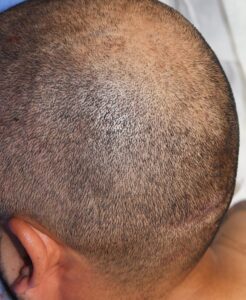 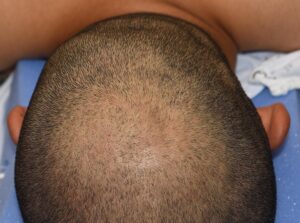 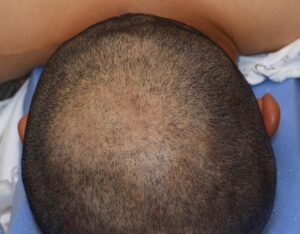 While designing custom skull implants for occipital asymmetry correction, the bony contribution makes up the majority of it. Careful attention needs to be paid to how far it extends anteriorly as well as to the opposite good side on the back of the head. The flattening always extends more anteriorly than one would think and the forward position of the ear is a good indicator of such.

1) Occipital plagiocephaly is the most reason patients seek back of head symmetry correction.

2) The unilateral flattening on one side of the back of the head covers a larger surface area than it appears when designing an implant to treat it using the patient’s 3D CT scan.

3) When designing a custom occipital implant for plagiocephaly the soft tissue component of the back of the head flattening must be factored into its design.