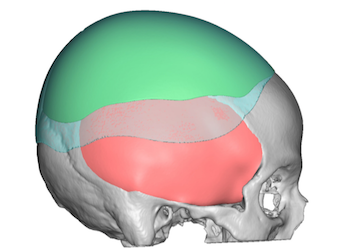 In determining skull implant volumes the consideration of how much the scalp can stretch is key. While there is no preoperative test to make that determination, the thickness of the scalp is one key determinent. As a general rule the more skin pigmentation that exists the thicker the scalp is. Thicker scalps stretch more than thinner ones. But scalp stretch predictability aside I generally do not like to try and place a skull implant that has more than 150cc volume…unless a scalp expansion has been done first. First stage scalp expansion can allow for implant volumes of 150cc to 300ccs. 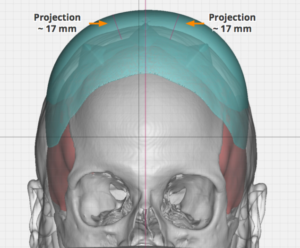 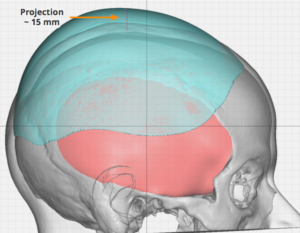 Case Study: This female had a two stage skull augmentation procedure five years previously with a 220cc implant volume. She desired an implant shape and volume that added more to the sides and back of her head as well as a little bit more height. The new custom skull implant had a volume of 300cc which was 36% bigger than the first implant. 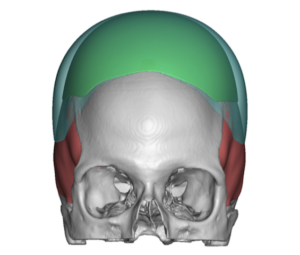 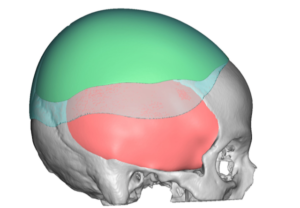 Comparing the original skull implant (green) with the new design (teal) showed the expanded  footprint of the new implant. 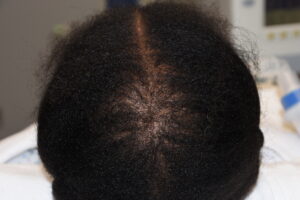 Before prepping and draping for the skull replacement procedure the well healed scalp scar from the prior surgery could barely be seen. 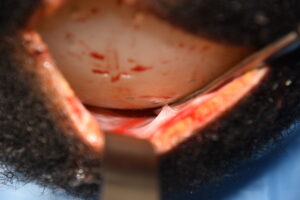 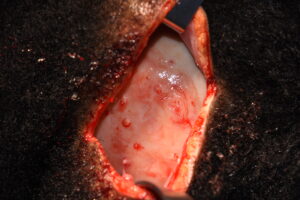 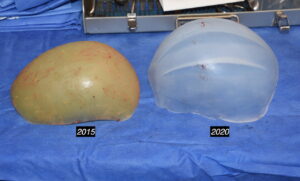 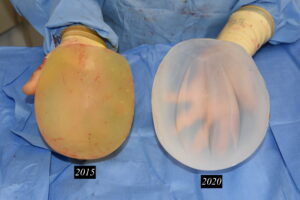 A circumferential capsulotomy was performed to allow for the expanded footprint of the new implant. A capsulectomy was done from the bone surface. The new custom skull implant was rolled and inserted and closed without any tension on the scalp closure. 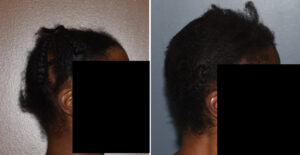 Her first day after the placement of the new custom skull implant showed the amount of head size increase from where she originally started.

1) A second larger custom skull implant can be used to gain additional skull augmentation in the range of 30% to 50% more volume.

2) In designing a skull implant with more volume it usually needs to have a larger footprint as well for a more normal shape.

3) Larger skull implants benefit by the use of internal wedges in the design for placement.