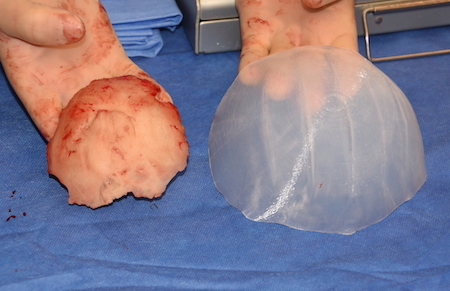 Background: Aesthetic skull augmentation by onlay addition (on top of the skull bone surface) can provide head shape improvements of various congenital deficiencies. Whether this is on the back of the head, the crown area or the top and/or the sides, visible improvements in the head shape can occur within the limits of how much the scalp can stretch.

The historic, and sometimes still used today, approach to aesthetic skull augmentation is with the use of bone cements. This seemingly logical approach comes from the two words used in its name….bone and cement. This seems like a intuitive approach as cementing a substance to bone (that presumably is like bone) would be the most natural. But the reality is that some bone cements (PMMA) are really just a plastic material and even hydroxyapatite is a synthetic calcium phosphate that is much more dense and non-porous like bone.

But the real limiting factor with bone cements for aesthetic skull augmentation is how they have to be applied. Because they are mixed and molded into place during surgery, they require a very open approach for a smooth application and set. This translates into the need for a coronal scalp incision in many cases which can be a limiting aesthetic factor for many patients. (excessive scar burden) The other limiting aspect of bone cements is being able to control their shape for an assured smooth contour and getting the desired amount of augmentation.

Custom skull implants circumvent these issues through the use of a preoperative design and the ability to transform their shape for introduction through much smaller scalp incisions. In fact custom skull implants have the opposite problem of bone cements…they can inadvertently be designed to exceed the scalp’s ability to contain them. 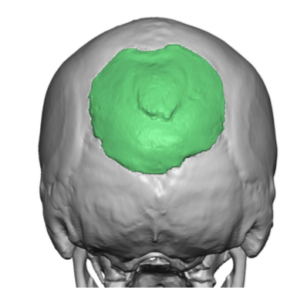 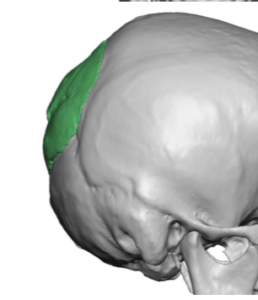 Case Study: This patient had a prior history of PMMA bone cement augmentation for the back of the head which was placed through a coronal scalp incision. A 3D CT scan showed the location of the bone cement, its irregular shape as well as its total volume. (30ccs) Interestingly after the skull augmentation the patient had a hair transplantation procedure using a back of the head strop graft harvest. (a somewhat risky proposition for the intervening scalp skin between the two incision lines) 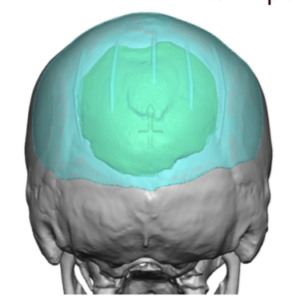 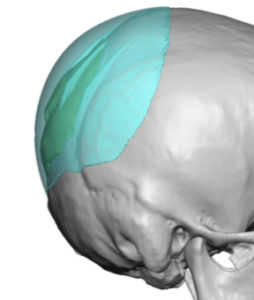 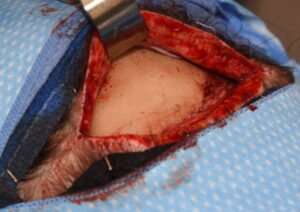 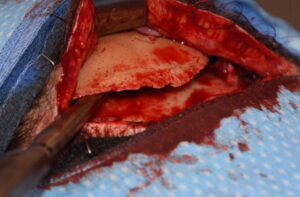 Under general anesthesia and in the prone position the old strip harvest scar across the back of the head was partially opened exposing the indwelling PMMA bone cement. The bone cement was easily lifted off the bone and removed. 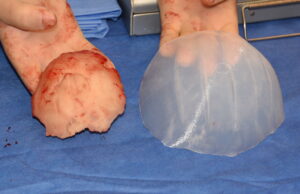 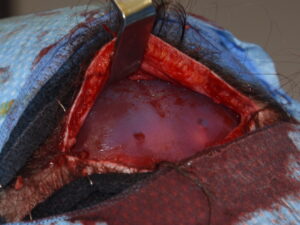 The custom skull implant, which was 4X bigger in volume, was folded and inserted. It was then unrolled and positioned as indicated in the preoperative design using the compass marker. 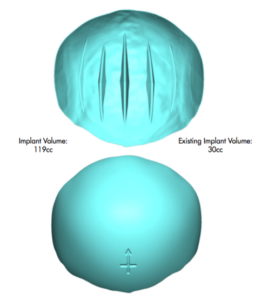 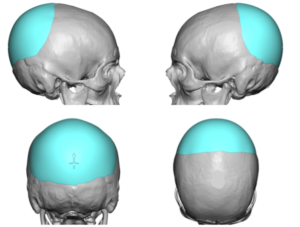 This case illustrated the dramatic differences between the use of bone cements vs a custom skull implant design. These two types of skull augmentation methods differ most signficantly in the amount of skull augmentation that can be achieved as well as in the smoothness of the contour. The one benefit of the indwelling PMMA bone cement is that it probably provided some amount of scalp expansion which was necessary given the prior strip harvest from the hair transplantation.

2)  A primary bone cement skull augmentation does provide some scalp tissue expansion that aids its secondary replacement with a custom skull implant.

3) A prior occipital strip harvest for hair transplantation provides both an opportunistic incisional access as well as some restriction for how much subsequent implant volume that can be tolerated.