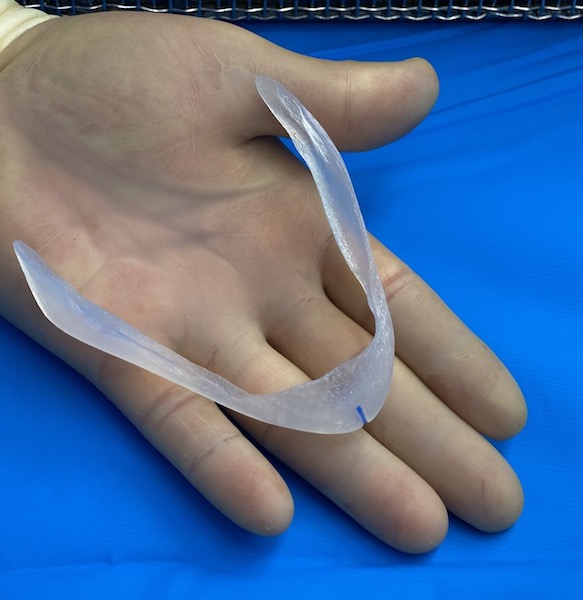 Background: Syndromic jaw deficiencies represent the most severe lower facial deformities that occur. There is a spectrum of such congenital craniofacial deformities of which hemifacial microsomia and Treacher Collins are the most recognized. What these syndromes share in common is that the branchial arches are affected which results in varying degrees of mandibular underdevelopment as part of their craniofacial structural issues. Surgical reconstruction of the lower jaw includes bony manipulations from distraction lengthening, rib grafts and orthognathic surgery which depends on the patient’s age when they are done and the severity of the lower jaw deformity.

In less severely affected Treacher Collins syndrome all of the basic elements of the lower jaw are present but its overall forward growth is significantly diminished. This would allow for orthodontics and orthognathic surgery to be performed in the teenage years. To maximize chin projection such sagittal split mandibular advancements are often combined with a sliding genioplasty.

As effective as such bony jaw reconstructive efforts can be their best aesthetic results are in what they can achieve in forward projection of the lower third of the face. Such bony movements are not as effective at contour symmetry correction or in creating increased jaw width or a specific jaw shape. With the bony changes maximized this is where the role of a custom jawline has value for providing the final aesthetic jaw shape effects of the patient so desires. 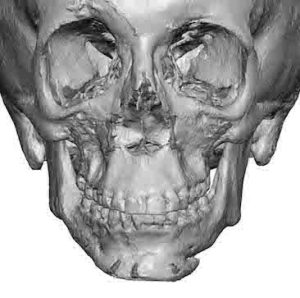 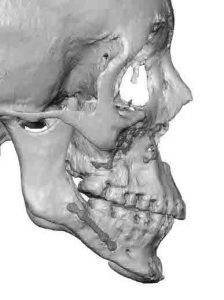 Case Study: This female with congenital Teacher Collins syndrome had been through previous LeFort I, sagittal split mandibular and chin advancements. She desired to have more chin projection but with the specific objective of a v line shape to the jawline as well as improvement in the bony asymmetry. 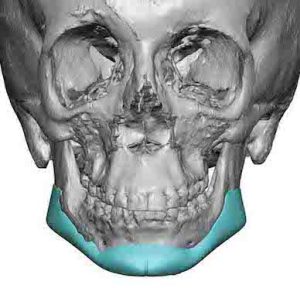 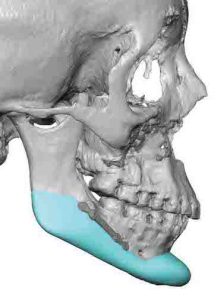 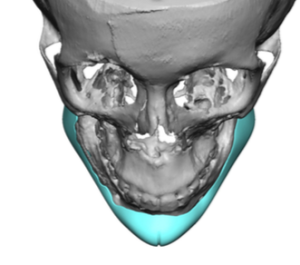 Using her 3D CT scan a wrap around custom jawline implant was designed which provided more chin projection (7mms), minimal jawline/angle width (4mms) and differential jawline/angle lengthening. (7mms right, 4mms left) The shape of the jawline came to more of a V at the chin. 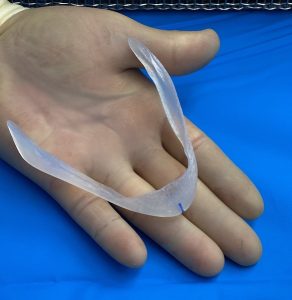 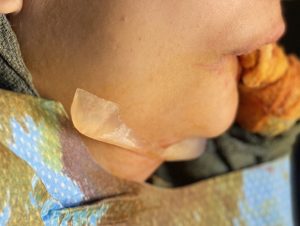 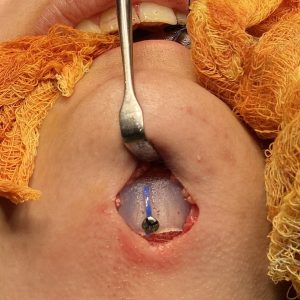 Under general anesthesia and through a three incisional dissection approach the custom jawline implant was introduced in a front to back direction as one piece. Getting the jawline/angle in position on both sides is the key as much of the implant is on the bottom part of the jaw not the sides. The design and positioning of the implant is built around the existing plates from the prior sagittal split osteotomy.

In ‘reconstruction-based’ jaw reconstruction a custom jawline implant can provide the final desired shape to the lower face that may not have been able to be achieved through manipulation of only the bone. But every effort should be made to maximize the bone changes before any onlay implant approach is done.

1) Jaw asymmetries/deficiencies can be the result of a congenital deficiency, prior surgery or both.

2) In Treacher-Collins syndrome all such patients will have undergone jaw advancement often within sliding genioplasty to maximally improve lower jaw projection. But jaw width and shape deformities will persist.

3) A custom jawline implant offers the final lower jaw reshaping to maximize what can be achieved in the congenitally deficient that has previously maximized bony surgical reconstructions.