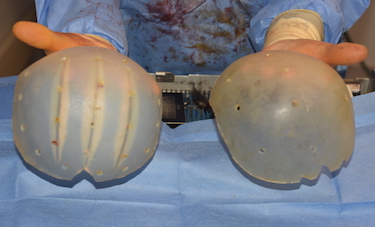 Background: Aesthetic skull deformities can involve any of the skull surfaces but almost always involves at least two of them. In larger types of skull augmentations the typical skull surface involvements is usually three or four of the available surfaces. In these larger multi surface skull augmentations the consideration of the scalp’s ability to stretch over the implant must be considered in the treatment plan.

Managing the scalp’s ability to adequately cover a large custom skull implant can be circumvented with a first stage scalp expansion. With a large round tissue expander placed into the central area of the future skull implant, the scalp can be comfortable stretched out to 250 to 350ccs which is more than adequate for most larger skull implants.

One issue in larger skull implants that can be overlooked, however, is how to get such a large skull implant through a more aesthetically acceptable small scalp incision. One approach is to section the implant into two pieces and reassemble it back together once inside the tissue pocket. An alternative approach is to make a lower durometer (softer) implant that allows greater compressibility to fit through a limited scalp incision. Such an implant will also place less stress on the overlying scalp because it has a bit of ‘give’. Concerns that a skull implant that is a bit softer than bone and would create a spongy aesthetic effect are unwarranted.

Case Study: This male desired a large occipital augmentation due to a congenital flattening of the back of his head. He wanted his skull implant design to be ‘large’. In placing such a large skull implant the two important issues of enough scalp stretch to a accommodate it and getting the implant placed through the scalp incision must be considered. A design on a computer screen is one thing but making it work in real life poses anatomical challenges/constraints. 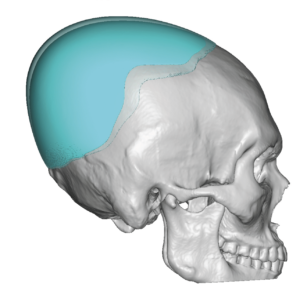 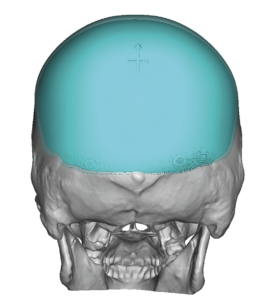 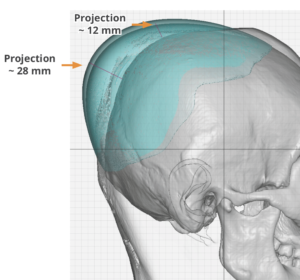 The custom skull implant design was done to create maximal high back of head  projection increase of almost 30mms. (with a total implant volume of 350ccs) Because of the uncertainly of how much implant volume the scalp could accommodate, despite tissue expansion being done, a two layered implant design was created. With this approach, if the scalp was not adequately stretched to accommodate 350ccs, then only one layer of the implant could be used for a lesser volume that still had a smooth outer surface. 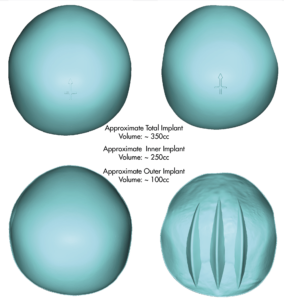 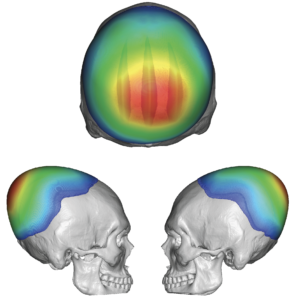 In the two layer skull implant design the base layer was 250ccs. The second or overlay implant added an additional 100ccs. Interestingly the thickness of the second outer implant layer was only 4mms at its maximal projection point yet it added 100ccs of volume due to its surface area coverage.

A first stage scalp expander was placed and successfully inflated over 8 weeks to the needed 350ccs. This adequately addressed the scalp stretch issue. 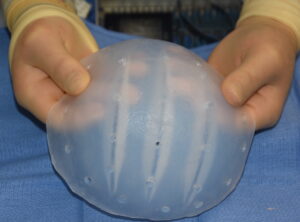 During the second stage surgery the scalp tissue expander was removed and a circumferential capsulotomy performed. This was necessary as the footprint of the tissue expander was round while the implant footprint is more oblong and covers a larger surface area. To prepare the implant for placement 6mm perfusion holes were placed around its perimeter to allow for postoperative tissue ingrowth. The new lower durometer of the solid silicone allowed for good implant folding and insertion. 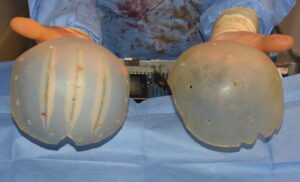 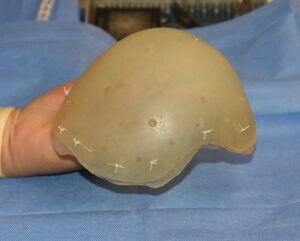 Once the base implant was placed it was determined that there was enough room for the overlay implant. This was then inserted but it was uncertain how the edging fit around the unseen perimeter of the implant. (except that the part of the implant near the incision) Then with were removed and the overlay was sutured to the base piece around the edges. It was then reinserted with greater assurance that no edges of the overly implant were upturned or shifted.

In large head augmentations the important considerations are to create enough scalp tissue for coverage (without undue tension) and getting the implant into position with more limited scalp incisions. (non-coronal scalp incision) Besides the uses of scalp tissue expansion and a two layer implant design, the use of a lower durometer solid silicone material allows for increased implant modification without sacrifice the firm bone-like feel on the outside.

2) In larger volume skull implants a lower durometer solid silicone material is advantageous as it is more adaptable for smaller incisional placement and places less tension on the overlying scalp.

3) In large custom skull implants a two piece design is useful as one can never be certain how much implant volume can be actually inserted even with a first stage scalp expansion.